A world-leading scientist will talk about ribosomes – the large molecular machines that are crucial to life – at a major public lecture at the University of York next week. 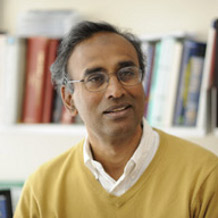 Dr Venki Ramakrishnan, a structural biologist, who was awarded the 2009 Nobel Prize for Chemistry (with Thomas Steitz and Ada Yonath), will deliver this year’s Cantor Nanoscience Lecture.

Dr Ramakrishnan was awarded the Nobel Prize for his work on the structure and function of ribosomes, the large molecular machines present in all cells that translate information encoded on DNA and turn it into various proteins. Because they are crucial to life, and ribosomes from bacteria are slightly different from human ones, they are also a major target for many antibiotics that kill bacteria by blocking their ribosomes.

During his public lecture on 25 May, Dr Ramakrishnan will discuss “How antibiotics illuminate ribosome function and vice versa”.

A scientist at the MRC Laboratory of Molecular Biology in Cambridge, Dr Ramakrishnan grew up in India and moved to the United States in 1971. After initially being trained as a physicist at Ohio University, he switched to biology in 1976 at the University of California, San Diego.

His interest in ribosomes dates back to 1978 when he joined Peter Moore’s laboratory as a postdoctoral fellow at Yale University. He began his independent career at Brookhaven National Laboratory in 1983. In 1995 he moved to the University of Utah to become a professor of biochemistry.

In 1999, Dr Ramakrishnan moved to his current position as a scientist at the MRC Laboratory of Molecular Biology, where he focuses entirely on ribosome structure and function. He is Fellow of the Royal Society and a Member of the US National Academy of Sciences.

His work has led to insights into how the ribosome ‘reads’ the genetic code, as well as into various aspects of antibiotic function. The Nobel Prize was awarded for determining the molecular structure of the ribosome using X-ray crystallography and the resulting understanding of how it works.

Dr Ramakrishnan said: "The ribosome is the large macromolecular machine that translates the genetic code into protein in all life forms. Since its discovery in the 1950s, it has been the subject of intensive study in many laboratories world-wide. In the last decade, the structures of the atomic subunits and subsequently of the whole ribosome trapped in different stages of translation have revolutionised our understanding of the process.”

Admission to the Cantor Nanoscience Lecture in the Department of Physics, Room P/X001, on Friday, 25 May at 5.30pm is by free ticket only, available from www.york.ac.uk/tickets, email publiclectures@york.ac.uk or phone 01904 324466.