Ground-breaking research by an international team of scientists will help to make one of the most versatile of bacteria even more useful to society and the environment. 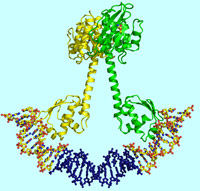 Though it lives naturally in the soil, the bacterium Bacillus subtilis is widely used as a model laboratory organism. It is also used as a ‘cell factory’ to produce vitamins for the food industry and, in biotechnology, to produce enzymes such as those used in washing powders.
The BaSysBio research project, carried out by a consortium of researchers from eight European countries and Australia including the Department of Chemistry at the University of York, is unprecedented in its scope and has given scientists an unrivalled level of understanding of the way the organism can adapt to diverse conditions.
Billions of years of evolution have shaped the performance of B.subtilis cells and the research has provided novel insights into the regulatory processes that help them to maintain their metabolism in prime condition.
Published in two papers in the latest edition of Science, the findings will enable scientists to engineer B. subtilis to become an even more effective producer of metabolites for a wide range of industries from pharmaceutical and chemical manufacturing to the agri and food sectors. The work also has medical implications as it will help scientists to understand how bacteria deal with changing conditions during infection.
B. subtilis is able to survive and grow in diverse and changing environments. The research used expertise from different fields ranging from molecular biology to bioinformatics and mathematics to investigate the cell as a system of interacting molecular components and the strategies it uses to adapt to varying conditions.
The researchers acquired and analysed large experimental data sets which were used with mathematical models to capture the complexity of the cellular system. They analysed the genes expressed under more than 100 different conditions that mimic the natural and laboratory environment of the organism.
It was already known that the B.subtilis genome carries around 4,200 genes but the new research identified 512 new potential genes in the bacterium.
The project co-ordinator Dr Philippe Noirot, of the INRA Centre at Jouy-en-Josas, near Paris, says:  “Besides their scientific novelty, these two studies also represent a potential blueprint for bacterial systems biology. Our work will potentially make B.subtilis an even more efficient producer of enzymes. The results and approaches used in our studies, suggest it is now possible to design specific experiments to unravel other, previously more intractable, cellular processes.”
Professor Tony Wilkinson, of the York Structural Biology Laboratory, says: “The work has thrown up surprises. In one instance, where we expected that a few simple tweaks would be sufficient to achieve an adaptation, we observed wholesale changes involving almost half the genes in the organism.”

Professor Uwe Sauer, of the Eidgenössische Technische Hochschule, Zürich, says: “The work represents a conceptual step forward in how to assess and understand cellular adaptation to new situations that is fundamental to basic science as well as applications in biotech and medical research.” Prof Jan Maarten van Dijl, of the University Medical Centre in Groningen, adds:  “These studies help us to understand how bacteria deal with changing conditions during infection such as when normally commensal bacteria such as Staphylococcus aureus that live in the nose and throat adapt and invade the body and cause disease. This provides a foundation for research into the development of agents to combat these invasive bacteria.”

The work has been backed by a €12 million grant from the European Union.