A new study by scientists at the University of York has shed new light on the use of mollusc shells as personal adornments by Bronze Age people. 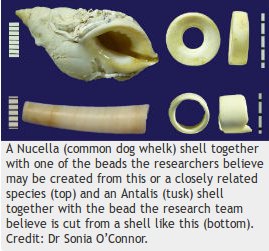 They discovered that Bronze Age craftspeople used species like dog whelk and tusk shells, both of which were likely to have been sourced and worked locally, to fashion tiny disc-shaped beads in the necklace. The research is published in PLOS ONE.

The researchers included archaeologists, mathematicians, chemists and physicists, the latter from the BioArCh and York Centre for Complex Systems Analysis (YCCSA) and the Departments of Archaeology, Mathematics, Chemistry and Physics at the University of York. Dr Sonia O’Connor, of the University of Bradford’s Department of Archaeological Sciences, carried out the light and electron microscopy, and prehistoric jewellery specialist Dr Alison Sheridan, of National Museums Scotland, facilitated access to the Great Cornard necklace, which had been excavated by Suffolk Archaeology.

When it was first realised that the tiny white beads had been made from shell, the question arose as to its source. Had the shell been obtained locally or did it originate from a species from further afield, perhaps even the Mediterranean thorny oyster (Spondylus)? The Mediterranean thorny oyster is a shell of long-standing symbolic and cultural significance which is known to have been used on the Continent around the time when the Great Cornard necklace was made.

But this collaborative research, led by Dr Beatrice Demarchi, of York’s Department of Archaeology and BioArCh, and Dr Julie Wilson, of the Departments of Chemistry and Mathematics and YCCSA, has shown this not to be the case, and has suggested an alternative possibility.

Dr Demarchi said: “Dog whelks and tusk shells were likely to be available locally so these people did not have to travel far to get hold of the raw materials for their beads.

“There is evidence, from elsewhere in Britain and further afield, for the use of tusk shells at various times in the past. This may well be because they are relatively easy to work and their hollow shape is very distinctive.”

Dr Wilson added: “The statistical analysis used pattern recognition algorithms for taxonomic identification, comparing the composition of the beads with a large database of shell amino acid compositions. Although we cannot know the origin of the beads for certain, our multidisciplinary approach provides additional evidence for the identifications.”

This research was possible thanks to funding from the EU FP7 Re(In)tegration grant PERG07-GA-2010-268429 (project: mAARiTIME) and the AHRC/EPSRC Science and Heritage programme, Award AH/H032150/1(Project: Cultural Objects Worked in Skeletal Hard Tissues), with contributions from NERC, the Wellcome Trust, the Leverhume Trust and English Heritage for amino acid analyses, and the Brazilian funding councils CAPES and CNPq for Raman spectroscopy. The team is grateful to all the collaborators who, throughout the years, have submitted their shell samples for analysis at the NEaar laboratory, allowing the amino acid database to be developed.