Dr Moray Stark from the Department of Chemistry at York has developed a powerful Teaching Laboratory intervention to help students improve their chemical handling skills.

The ability to handle chemicals safely is a key aspect of the learning development of chemistry students. Previously, however, there have been no investigations of the quantity of chemicals spilled by students during lab experiments, neither are these skills routinely assessed. Clearly, spillage of chemicals can potentially have safety implications, as well as environmental implications in terms of waste.

Alongside two final year project students, Aimilia Tsokou and Alix Howells, Dr Moray Stark developed a unique intervention for first year chemistry undergraduates at the University of York. Their methodology used paper liners to allow easy assessment of the volume of liquid spilled by students during an analytical chemistry experiment. On average, the students spilled approximately 1% of the total volume handled, however, on the individual level, spillage varied greatly, by almost a factor of 1000, from 0.02% to 10% of the total. 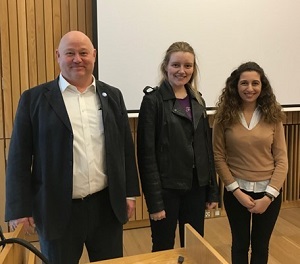 In an innovative step, the researchers developed feedback to give to the students on the potential safety significance of the volume of chemical they each had spilled, and then carried out a randomized controlled trial (RCT) to test whether this intervention improved chemical handling. Although RCTs are the ‘gold standard’ and are commonly used in areas such as medicine, they are virtually never used in chemical education research.

The undergraduates were asked for consent, split into two groups and did an experiment – only one of the groups received feedback on the chemical they had spilled. Both groups of students then repeated the experiment in order to assess differences resulting from the feedback. There were significant differences in the volume of chemicals spilled by the two groups of students, with those who did not receive any feedback spilling, on average, twice as much as the group that had received feedback. At the end of the repeat experiment, the second group of students also received the useful feedback. 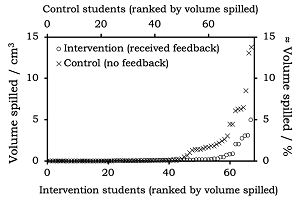 Data showing that students receiving the feedback intervention went on to spill smaller volumes of chemicals.

Dr Moray Stark said: “It was really pleasing to see that explaining to students the safety implications of spillage improved their chemical handling ability. The approach we have developed can provide meaningful feedback to the student, as well as potentially improving safety and skills in the laboratory.”

Speaking about the design of his study, Dr Stark added: “It can be challenging, when performing educational experiments, to achieve reliable results – this randomized controlled trial approach could be more widely used in chemistry education research.”

The Department of Chemistry is committed to delivering high quality, innovative teaching, as reflected in its exceptional scores in the National Student Survey and the high rankings of the Department in university league tables. Practical teaching in York is very innovative and focusses on developing students practical skills in a high-quality laboratory environment.

Dr Stark’s research is published in Journal of Chemical Education.