York’s Department of Chemistry will play a crucial role in a project to accurately estimate global climate change since the start of the industrial era, using data collated since the days of the Clipper ships over 200 years ago. 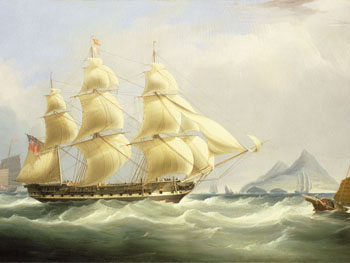 The GloSAT project will be led by the National Oceanography Centre (NOC) in collaboration with colleagues in the Universities of York, Reading, East Anglia, Edinburgh and Southampton, as well as scientists from the Meteorological Office’s Hadley Centre.

Current observational estimates of temperature change are made through a combination of sea-surface temperature from the ocean, and air temperature over land and ice; a complex process which can be prone to inconsistencies.

Accurate data is essential in assessing the effectiveness of global efforts to limit increases in the Earth’s surface temperature in line with the 2015 landmark Paris climate agreement.

GloSAT will improve consistency by creating a new observational record using air temperature over the ocean, and will even use data going back as far as the 1700s.

Air temperature was measured on ships for decades before sea-surface temperature, meaning scientists can extend the data record back further in time.

One source of early marine air temperature observations is the fleet of the English East India Company between 1789–1834 along trade routes from Europe to India and Southeast Asia. There are also observations from land stations before 1850 that have not yet been used in global datasets.

He added: “The University of York will be assessing the reliability of the historical temperature data by performing exhaustive comparisons between different observations.

Professor Cowtan currently maintains a version of the historical temperature record, based on data from the UK meteorological office, which is widely used in the climate science community for understanding temperature change over the past 170 years.

The GloSAT project will commence in October 2019 and will run for four years, it is funded by the National Environmental Research Council. The University of York will receive £307,755 of a £3.7m grant.