Gels self-assembled by simply mixing sustainable, commercially-available ingredients have high conductivities and great potential for use in energy technology.

In recently published research, Professor David Smith and his research team have developed innovative conductive gels based on mixing simple commercially-available building blocks. Their gels are formed in ‘deep eutectic’ solvents, which are liquids created by mixing together two simple environmentally-friendly solid components.

Deep eutectic solvents are known to have high conductivity as a result of their ionic composition, but their use as electrolytes in energy applications such as batteries and solar cells is limited because of the risks of liquid leakage. In principle, however, ‘solidified’ versions of these liquids that retain their high conductivities, would be much easier to handle and both safer and simpler to use.

The Smith group has developed ‘supramolecular eutectogels’ from these deep eutectic solvents, which retain the high conductivities of the original liquid, but in ‘solid-like’ form. Their innovative step is to generate gels by simply mixing in a small molecule additive, 1,3:2,4-dibenzylidenesorbitol, which is also commercially available. This molecule self-assembles into nanofibres that form a network through the deep eutectic solvent. While this network prevents the flow of the bulk liquid, it allows the individual ions to retain their mobility on the molecular scale. This means the ions diffuse effectively unhindered through the gel structure, and hence the conductivity is retained. 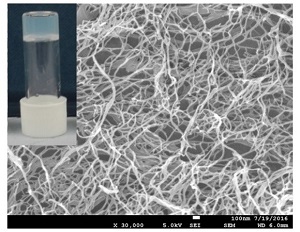 Supramolecular eutectogel based on a commercially-available additive that self-assembles into a nanoscale gel network in a sustainable conductive liquid.

Although there have been a limited number of previous reports of gels formed in deep eutectic solvents, this is the first time gelation has been achieved using the reversible self-assembly of a simple, cheap, low-molecular-weight additive. This approach makes these gels thermally reversible, highly tunable and ensures their low-cost and easy use.

The authors also went on to demonstrate that these gels could withstand high concentrations of lithium ions, and once again, retain their conductivity profiles. This suggests potential applications of this simple approach in next generation lithium ion battery technology.

Professor Smith said: ‘The low-cost nature of this system is particularly attractive – all components of the system are commercially available, cheap and sustainable. In principle, these gels could be directly applied in energy technology with very little further development.’

Professor Smith is part of the newly-formed Molecular Materials group in the Department of Chemistry, which focusses on developing innovative technologies based on molecular-scale engineering of a wide-range of materials systems. In particular, the group targets applications ranging from tissue engineering and drug delivery to opto-electronics and battery technology.

The research was funded by the European Union through a Marie Curie Action and was carried out in the lab by researchers from Spain (Dr Jorge Ruiz-Olles), The Czech Republic (Dr Petr Slavik) and Scotland (Dr Nicole Whitelaw). The research paper is published in Angewandte Chemie.