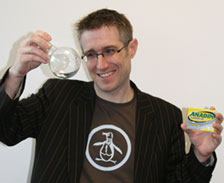 This annual lecture, held in the historic Merchant Adventurers' Hall in York, was instituted in 1997 as a platform from which the University could inform the people of the City of York of the discoveries made by the University. The lecture is put on jointly by the University and the Merchant Adventurers of the city of York. Each lecture focuses upon an important contribution which has been made to academic knowledge in the pure and applied sciences, but also demonstrates how this contribution can be applied for the benefit of society.

Professor David Smith  researches in one of the most exciting frontiers in modern chemistry - Nanochemistry - the synthesis and study of objects as small as just a few nanometres in size.

Admission: By free ticket only. Please send your name and postal address to publiclectures@york.ac.uk or call 01904 432622