For a second successive year, the York Festival of Ideas has won the award for Outstanding Cultural Festival (Large) at the York Culture Awards. 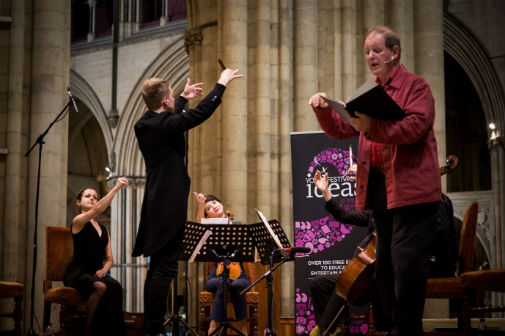 Michael Morpurgo at the York Festival of Ideas in 2017

The award recognises the best of large scale festivals with over 5,000 attendees taking place in the city of York.

York Festival of Ideas was established in 2010 is coordinated by the University of York. This summer it was home to more than 200 public events – including talks, performances and exhibitions - under the banner of Imagining the Impossible.

Joan Concannon, Director of York Festival of Ideas, said: “We are so proud to have won this award for the second year running.  York truly is a city of ideas, innovation and inspiration and we are very grateful to all our amazing audiences, festival partners and the incredible festival team for helping us to deliver such a compelling Festival programme.”

Joe Lamyman, a third-year University of York student in the Department of Theatre Film and Television, was also highly commended in the Rising Star category, which recognises a young person who has made a significant cultural impact.

2019 will be the ninth York Festival of Ideas and events will be on the theme of World of Wonder. For updates on the festival as soon as they become available, join the mailing list.