In the new National Curriculum for science, ‘How Science Works’ has become ‘Working Scientifically’ – a strand designed to build students’ understanding of the ways in which data are collected and analysed, how scientific explanations are developed, and how science and society interact.

These ideas have always been an integral part of the Twenty First Century Science course, developed for students through the ‘Ideas about Science’ strand – an approach that had its origins in the recommendations of the Beyond 2000 report (read more about this approach).

The ‘Ideas about Science’ strand provides complete coverage of ‘Working Scientifically’ for GCSE science. The strand is embedded throughout each Twenty First Century Science course, so understanding is developed within relevant contexts (rather than as a ‘bolt on’), to help ensure it is not neglected.

For 2016, the ‘Ideas about Science’ statements in the Twenty First Century Science specifications have been refined and slimmed down, to ensure that they provide specific, teachable and assessable coverage of the requirements of ‘Working Scientifically’. The ‘Ideas about Science’ are now presented as four key questions, explained with a teaching and learning narrative and assessable learning outcomes. These are:

IaS1: What needs to be considered when investigating a phenomenon scientifically?

IaS2: What processes are needed to draw conclusions from data?

IaS3: How are scientific explanations developed?

IaS4: How do science and technology impact society?

The ‘Ideas about Science’ are explained in relevant contexts throughout the new student books, and in addition the seventh chapter of each book presents case studies that exemplify the ideas in engaging, real-world contexts.

The nine case studies include: 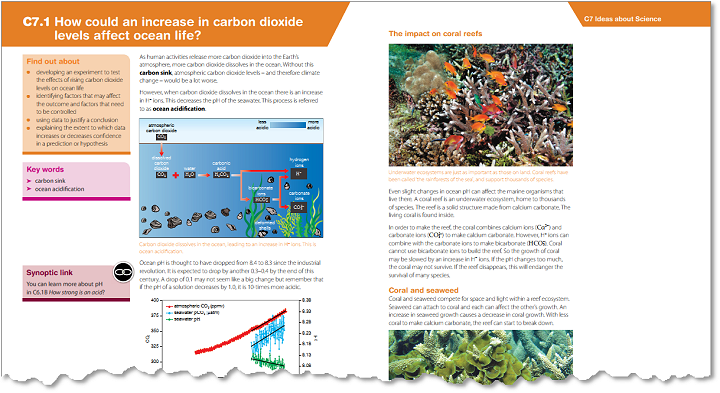