Diana Kayser holds a bachelor’s degree in Musicology from the University of Cologne. During her time there she specialised in Systematic Musicology with a focus on Music Psychology and Music Cognition. She wrote her Bachelor’s thesis about music and empathy. Diana did an exchange semester at the University of Ghent where she got introduced to some of the concepts and theories by Marc Leman, which influenced her future research, giving it a more philosophical turn.

After graduating from Cologne, she was looking for a new challenge and studied Norwegian in order to get into the Masters program in Musicology at the University of Oslo. Until her graduation in 2016 she worked as a research assistant for the FourMs-research group at the Department of Musicology. In her Masters thesis, Diana critically evaluated research methods that have been used for studying emotions in music and suggested a novel approach using facial expressions of emotion to avoid some of the pitfalls that come with traditional approaches. In addition, she evaluated the advantages and disadvantages of different strategies for measuring facial expressions of emotion in an experimental setting.

Diana is really excited to be in York where she gets the chance to put the method she suggested in her MA into practice. She got awarded the Sir Jack Lyons Research Scholarship. 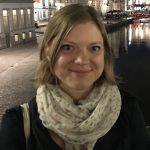