A BBC Radio 4 play, involving two PhD students at the University of York, highlights the ongoing issues of the ivory trade - with a focus on bringing the lesser heard voices of African communities to the fore. 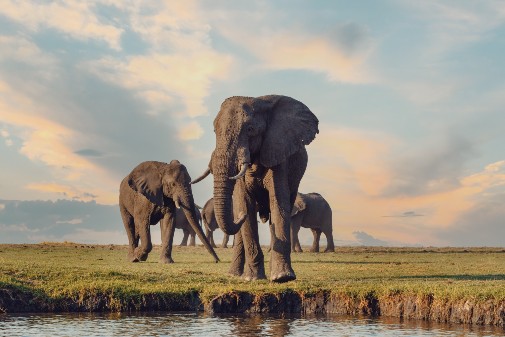 It is estimated there are around 350,000 elephants left in Africa

May Sumbwanyambe, PhD student at the School of Arts and Creative Technologies wrote the play whilst he was artist-in-residence at the Leverhulme Centre for Anthropocene Biodiversity, where he collaborated with Molly Brown, a PhD student at the Centre investigating consumer demand for ivory, who researched the diverse perspectives around ivory and elephant conservation included within the play.

Elephant poaching rates in Africa have declined in recent years, after reaching a peak in 2011, but research at York has shown that the elephant population remains threatened if action to tackle poverty, reduce corruption, and decrease the demand of ivory is not prioritised.

It is estimated there are around 350,000 elephants left in Africa, but thousands are killed each year by poachers. It remains unclear whether the ivory trade ban introduced in China in 2017 has had an impact on the declining poaching rate or whether there are other economic factors in play.

In a Radio 4 play titled Back Home, these issues are explored through the eyes of a Zambian woman who has lived in the UK for many years, only to return as part of a charity tackling animal conservation, but finding that her family have very different views and experiences of elephant conservation efforts.

Molly Brown said: “We often talk about the elephant ivory trade through a western perspective heavily laden with animal welfare priorities over biological conservation ones. To truly tackle the issues of why numbers of elephants are still under threat, it is important to remember that the conservation success that results in growing elephant populations comes with the very real increased threat to people’s lives and livelihoods.”

“A key argument made by some African nations is that they feel unrewarded for their successful elephant conservation programmes. These different perspectives are often underrepresented in the formation of  international trade bans, the most highly publicised interventions against ivory trade.

“In this play we wanted to highlight these perspectives and explore how seeing conservation efforts through different lenses - a western perspective as well as an African perspective - can be a very valuable way of moving things forward in a positive direction.”

Previous research at York highlighted that anti-poaching policies and law enforcement is not enough to solve elephant poaching and must be considered alongside the efforts to improve the livelihoods of local communities across Africa.

Experts also argue that governments need to prioritise social and behavioural change interventions to reduce demand for ivory in Asia and beyond.

May Sumbwanyambe, writer of Back Home and also a lecturer in creative writing at Northumbria University, said: “These are very challenging issues and often creative interventions, such as fictional storytelling, can provide a safe and more accessible way to access and understand very difficult or uncomfortable topics.

“By creating these fictional characters, with different lived experiences of animal conservation, we hope to show that having a variety of different voices around the table in discussions going forward, could be crucial to the survival of this magnificent and much-loved creature.”