Researchers studying the teeth of an elderly woman who lived 2,000 years ago have charted her diet from infancy to just before her death. 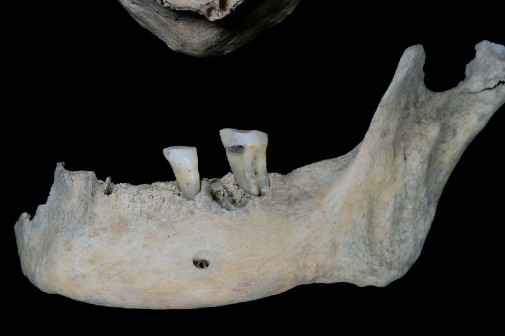 The surviving teeth of the 'Elder'. Credit: UHI Archaeology Institute

The work, conducted at the British Geological Survey’s isotope facility by researchers at the University of York, has provided more insight into the lifestyle of Iron Age people, showing evidence of a diet that included fish.

Although fish might be expected to be part of the diet of humans living so close to the sea, it was generally not eaten by people in Britain for thousands of years between the onset of farming and the medieval period.

The lower jaw of the woman, often referred to as ‘the Elder’ due to her age – estimated at around 50 or older - was placed in a ritual deposit inside a whalebone vessel, along with three new-born lambs at the Iron Age settlement, the Cairns, South Ronaldsay, Orkney.

Found outside a broch tower - a circular roundhouse with double drystone walls – the whalebone vessel was also laid alongside two large red deer antler and a saddle quern – a large stone with a hollow for grinding grain into flour.

Professor Ian Armit, from the University of York’s Department of Archaeology, said: “Isotopic analysis of the jawbone of this woman had previously shown evidence of marine protein consumption. This was only a small snapshot of her life before her death, however, and it was not clear whether fish was a permanent fixture of her diet, or just a necessity in her later years.

“She had only three teeth remaining that were particularly worn down and diseased, but one tooth was enough for us to analyse and go further back in time, from her infant years at around three years-old, to early adulthood to understand more of her diet at different stages of her life.”

The study showed that fish was routinely consumed throughout her life, suggesting that Iron Age people on Orkney did make use of the surrounding seas.

Site Director of The Cairns excavations, Martin Carruthers, a Lecturer in Archaeology at the Archaeology Institute at Orkney College, University of the Highlands and Islands, said: “It’s wonderful to be able to peer into the early, formative years of this older women’s life and actually establish something of her biographical details.

“Now we can see that the marine foodstuffs that she ate were after all a normal part of Iron Age life, at least for her, and this allows us to move on with further investigation into the diets of Iron Age society.”

The Cairns excavation is one of many sites included in the University of York’s COMMIOS project, an ERC-funded programme looking at methods of DNA and isotope analysis to improve understanding of Iron Age communities in Britain and Europe.

Members of the public can visit ‘the Elder’ and find out more about her life and times, at the exhibition on The Cairns excavations: ‘The Cairns: Living in the Landscape’ featuring at Stromness Museum until the 30 October.