Researchers at the University of York have shown how bacteria capture important nutrients to allow them to grow and survive in the body. 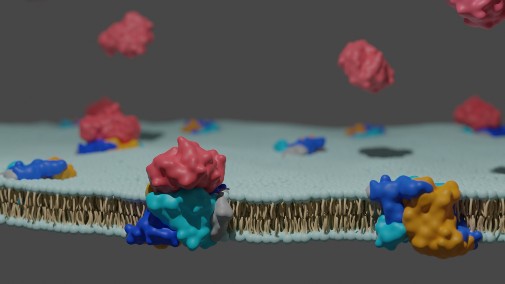 The study, in collaboration with the University of Bonn, Germany, suggests new ways to interrupt this system and prevent the bacteria from colonising the body and causing disease.

One particular bacteria, Haemophilus influenzae, which causes serious illness in children, uses a nutrient, called sialic acid, to coat its surface and hide from the body's immune response.

Other bacteria, with the help of a protein called a TRAP transporter, move it inside the cell using an ‘elevator’ system, which researchers discovered for the first time through this latest study.

Professor Gavin Thomas, from the University of York’s Department of Biology, said: “We discovered the TRAP transporter in our lab here in York nearly 20 years ago, but frustratingly it has been difficult to capture its structure. Now we can finally see how it works to allow bacteria to scavenge sialic acid in our bodies.

“With the help of Dr Gregor Hagelueken and his group at the University of Bonn, our aim was to find out how it moved nutrients so that we could see if this system could be interrupted, which would mean that the bacteria would ultimately die.”

Using a tool called a nanobody, which binds to a specific part of the transporter, the team solved the mystery of its structure, but they were also able to see that the tool could inhibit the TRAP by clogging up its elevator system.

Dr Martin Peter, a structural biologist at the University of Bonn, said: “Now that we know this system can be ‘clogged’ up, we have potential new paths to explore in reducing the bacteria’s ability to colonise the body.  There are bacteria that rely on this transporter to capture nutrients, and if it is not able to function properly, the bacteria will not be able to grow.”

The York group are now looking to build on this latest discovery to find other chemical routes to block the transporter, which could contribute to the development of a new drug in the future.

The paper, funded by the Deutsche Forschungsgemeinschaft (DFG) and the BBSRC, is published in Nature Communications.