Research at the University of York suggests that, as in the past, human societies in East Africa will face significant challenges to livelihoods in the future, due to the rapid rate of climate change. 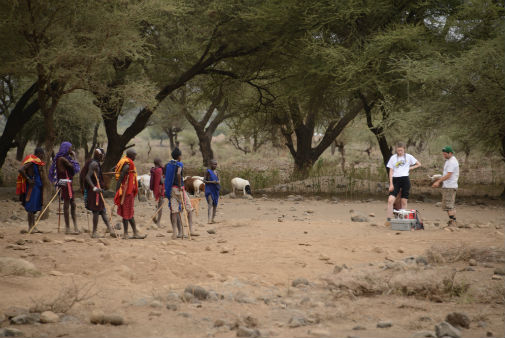 For the first time, scientists have brought together a significant volume of data describing on-land climate variability to show the nature and impact of environmental change in East Africa. This data is being used to understand the past and guide improved future climate predictions.

Currently global climate model predictions includes atmospheric and ocean data but do not include land-based environmental information.  This is due to the challenges of gathering archaeological and environmental data that charts thousands of years of land-use change history, which is vital for climate models to better predict the future.

After decades of field-work, however, research teams on every continent are coming together to share data that will build better global climate change models that includes atmospheric, ocean and land information.

Focusing on East Africa, data from 6000 years of land-history and environmental change, shows that in the past humans were able to adapt or move when the climate became dryer, by changing from an agricultural-based society to a pastoral one, or changing crop types for example, but extensive land-use today and population size means that it is much harder to move or adapt as the climate changes.

Professor Robert Marchant, from the University’s Environment Department, said: “By looking into the past we can see that climate and human interaction has evolved over a long period of time, with distinct patterns as one environment changes to the next.  We can see, for example, where the land has moved from a wet climate to a dry one and how this impacts on people’s engagement with the landscape.

“Today, however, the climate is increasingly variable, with less distinct seasons.  We see more extremes in the weather over erratic time frames – some long wet periods and some short, for example.  With 6,000 years of land use data, it is now clearer to see what some of the challenges surrounding issues such as conservation, livelihoods and migration futures for East Africa looks like.

“Throughout history we can see the close relationship between the climate and human use of the landscape, where humans have migrated, cultivated land, abandoned land, colonised land.  The difference with today, and into the future, is that whereas humans from the past were able to either change their relationship with the land or move to another area, societies today are too large and areas too populous to simply evolve with the land.”

Scientists argue that with this new data, combined with data gathered from other areas of the world, improved climate models could help societies prepare for the challenges ahead and mitigate potential damaging impacts.

The research paper, ‘Drivers and trajectories of land cover change in East Africa: Human and environmental interactions from 6000 years ago to present’, is published in the journal Earth Science Reviews.

The research is led by Professor Robert Marchant, Environment Department.