Researchers suggest a toxic chemical is more likely to be responsible for the deaths of thousands of crabs along the North East coastline than natural algae. 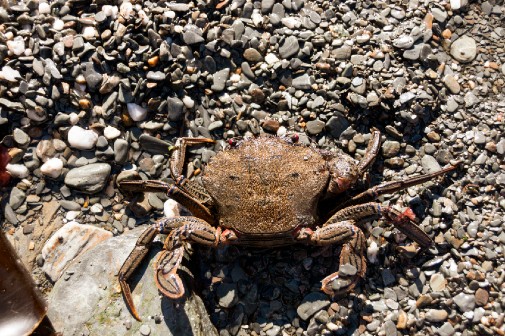 Pyridine can cause twitched and paralysis in crabs before death

Earlier this year fishermen linked the mysterious deaths of thousands of crabs and lobsters in the autumn of 2021 and spring of 2022 to dredging in the River Tees, and called for an investigation and more financial support.

The Department for Environment, Food and Rural Affairs (Defra), however, said that it was likely that algae was to blame for the deaths.

A new study, commissioned by the North East Fishing Collective and carried out by researchers at the Universities of York, Newcastle, Durham and Hull, has shown that pyridine, used as an anti-corrosion treatment in marine infrastructure, is highly toxic to crabs even at low levels, and results in twitching and paralysis before death - symptoms observed in the crabs by witnesses at the time of the mass wash-ups.

Dr Brett Sallach, from the University of York’s Department of Environment and Geography, said: “We looked at the possibility that pyridine, a chemical pollutant, could have resulted in or contributed to the crab and lobster mass mortality event.

“Here at York we worked with fishermen to collect water and sediment samples from impacted areas where dredging occurred.

“We analysed these for pyridine and found pyridine at relatively low concentration in the sediments. This provides evidence that there is exposure to the pollutant in the area.”

A number of sites

Computer modelling of dredging work in the Tees estuary in September and October 2021 concluded  that there were significant amounts of pyridine that could have spread down the coast as far as Whitby if it had been in the sediment.

The study said no pyridine was found in water samples taken around the estuary in May 2020 but it was discovered in sediment samples at eight out of 12 sites both near and offshore.

Researchers also looked at evidence for an algal bloom which, given the warm and calm sea conditions in autumn 2021, was present but was not unusually large and several larger blooms occurred in 2021 and 2022 without causing mass deaths.

The study concluded that further testing of the Teesside waters and sediment was needed, but that the preliminary evidence suggests that crab deaths are more consistent with poisoning by industrial toxins than by natural algal toxins.

The findings of the research were presented to the Environment, Food and Rural Affairs Select Committee. The source of pyridine still needs to be identified, researchers said, but it is a common industrial chemical.

Researchers from York, Newcastle, Durham and Hull universities have undertaken research on the loss of marine life, commissioned by the North East Fishing Collective with funding from the Fishmongers’ Company’s Fisheries Charitable Trust.

Given their potential to inform public policy, preliminary findings from this work were shared with interested agencies, including to the Environment, Food and Rural Affairs Select Committee as part of the submitted evidence.

Arrangements are now being made to further share the unpublished research data with government bodies. The research findings will be submitted for independent peer review and publication via normal academic channels, after which they will be openly accessible.