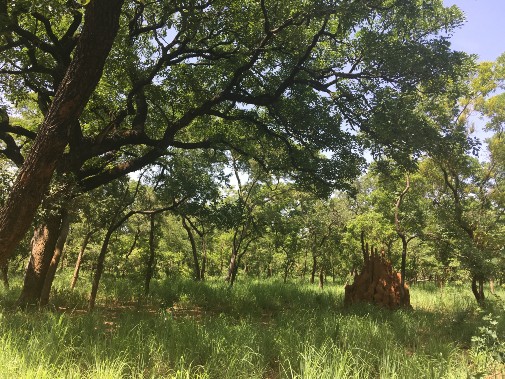 A third of vertebrates on the 'red list' could be at risk. Photo:Kate Parr, University of Liverpool

The study highlights how sustainability commitments, which play an important role in preventing the destruction of tropical rainforest, fail to protect nature in tropical grassy and dry forest habitats such as the Llanos in Colombia, Beni savanna in northern Bolivia, and Guinean and Congolian savannas in West and Central Africa.

The research team, led by the University of York, calculated that if oil palm producers cleared these habitats to make way for new plantations, a third of vertebrates on the International Union for Conservation of Nature’s red list of threatened species could be affected, including the blue-throated macaw in Bolivia, the giant pangolin in Congo, and the Hellmich's Rocket Frog in Colombia.

For the study, researchers mapped the areas around the globe that are at risk from new oil palm plantations. They identified 167 million hectares that are potentially suitable for the crop while still meeting the Roundtable on Sustainable Palm Oil’s (RSPO) definition of 'zero deforestation'. Of those 167 million hectares, 95 million are in grasslands and dry forests, mostly in South America and Africa.

As global demand for agricultural land increases researchers are calling for urgent protections for these habitats, which support a rich array of species and act as an important carbon store.

Co-author of the study, Professor Jane Hill from the Department of Biology and the Leverhulme Centre for Anthropocene Biodiversity at the University of York, said: “Palm oil is at the sharp edge of debate on how we can balance the need to feed the world and sustain livelihoods, while protecting nature.

“With a yield estimated to be six times higher than many other vegetable oils such as oil seed rape, palm oil is regarded as a miracle crop and it supports the livelihoods of millions of people in tropical countries around the world. So rather than avoiding or banning palm oil, we need to ensure effective international policies and governance to protect, not just tropical rainforest, but tropical grasslands and dry forests too.

“Our study highlights how current sustainability commitments could have the unintended consequence of putting areas of remarkable biodiversity at risk from the expansion of oil palm agriculture.”

Since 2018, many oil palm companies have signed up to the RSPO’s zero deforestation commitments, which means they cannot expand plantations into tropical rainforest or peatlands.

While concern from buyers and consumers about the environmental impact of palm oil has helped to drive membership of the scheme, many oil palm producers are yet to sign up to these commitments.

First author, Dr Susannah Fleiss, who carried out the study while researching her PhD at the University of York, said: “Although we found that oil palm yield in areas currently covered by grassland and dry forest would be lower than in tropical rainforest, these sites would still be attractive for the expansion of oil palm agriculture. We also found that irrigation would improve yield in many of these locations, potentially making them more attractive for expansion.

“Clearing these areas for plantations would have a serious impact on biodiversity, potentially reducing the ranges of one tenth of vertebrate species that are currently threatened with extinction. Plantation development would replace the existing habitat in these areas, disrupting the ability of the species present to find food and water, and affecting their migration routes.

“Large numbers of people live in tropical grassy and dry forest regions, where they often play a critical role in ecological processes such as burning and grazing. The expansion of oil palm agriculture in these areas could lead to a number of interlinked issues for local people and biodiversity.

“Our study highlights the strong need for internationally-coordinated governance to protect these habitats, in addition to the existing global efforts to protect tropical rainforest.”

Co-author Dr Phil Platts, Honorary Fellow at the University of York and Director of Earth Observation at BeZero Carbon, said: “Sustainability guidelines for palm oil were developed in the context of Southeast Asia’s rainforests, and so reflect the structure and function of those habitats. Now expansion is shifting to different ecological contexts, the scope of sustainability commitments must similarly expand, in line with the distinct biodiversity and carbon stocks now under threat.”

The research, published in the journal Nature Ecology and Evolution, is funded by Unilever,  in collaboration with the University of Liverpool, Oxford, the Potsdam Institute for Climate Impact Research, Unilever and BeZero Carbon.