Two scientists from the University of York have been recognised in the Research and Innovation category of the 2022 Royal Society of Chemistry prizes. 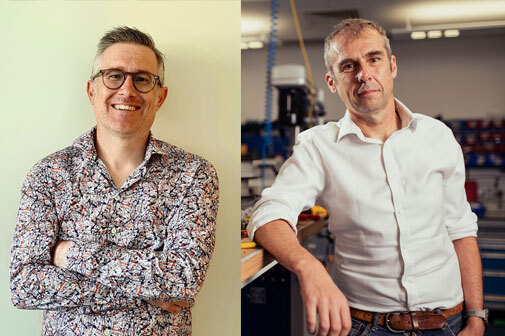 They join a prestigious list of past winners in the RSC’s prize portfolio, 60 of whom have gone on to win Nobel Prizes for their work. They will both receive £5,000 and a medal.

The Lord Lewis Prize is awarded every two years by the Royal Society of Chemistry to recognise distinctive and distinguished chemical or scientific achievements, together with significant contributions to the development of science policy.

Professor Lewis won the prize for the promotion and application of the chemical sciences to support development of evidence-based policy and regulation in the fields of air pollution and climate change.

Professor Lewis said: “It’s an honour to receive the award. I can only say thank you to everyone I've worked with over the years who has contributed to the research I've been a part of. Atmospheric chemistry is hugely collaborative, and without that ethos it would be impossible to do the work I do.”

Professor Lewis’s research aims to understand where pollution comes from, the impacts it has on health and the environment and how it can be reduced. This involves measurements made in the field and directly from sources such as vehicles, and the use of that data in models. A major part of his career has been spent assessing the impacts of different policies and interventions that have been introduced to address poor air quality and climate change.

Professor Smith won the prize for pioneering an understanding of molecular materials based on supramolecular gels.

Professor Smith said: “It's a genuine honour and great pleasure to receive this prize. It wouldn't have been possible without my remarkable co-workers and team members.”

Professor Smith’s research is focused on ‘supramolecular gels’ which reversibly assemble from small molecules. Such gels are highly tunable and can be programmed by molecular engineering to carry out unique functions.

In recent years, Professor Smith has developed a new family of hydrogels and demonstrated their potential for high-tech applications. These gels are based on very simple low-cost building blocks, and scalable syntheses, demonstrating that supramolecular chemistry can approach realistic commercial goals.

Inspired by his own husband’s health problems with cystic fibrosis and organ transplantation, leading to his untimely death, Professor Smith has created hydrogels capable of supporting cell growth. By combining multiple components, the Smith research group has created innovative ways of shaping and patterning such gels in order to direct and control cell growth. Such gels have potential future use in growing organs from a patient’s own stem cells, which could give rise to organs ‘on-demand’ and avoid problems with transplant rejection.

Professor Caroline Dessent, Head of the Department of Chemistry at the University York, said: “These are fantastic awards that recognise the exceptional contributions that Professor Lewis and Professor Smith have made to Chemistry over many years. It's great to see that both awards are for research with potential to deliver significant improvements in human health. To receive two such prestigious prizes this year demonstrates the strength of research that goes on at Chemistry at York."

Dr Helen Pain, Chief Executive of the Royal Society of Chemistry, said: “Although we are in the midst of negotiating a particularly turbulent and challenging era, it is important to celebrate successes and advances in understanding as genuine opportunities to improve our lives. The work of Professor Lewis and Professor Smith is a fantastic example of why we celebrate great science, and we’re very proud to recognise their contributions today.”