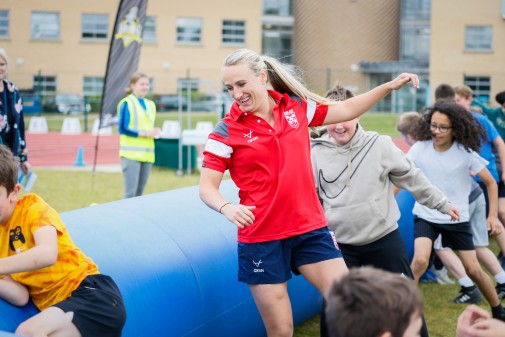 York is one of the host cities for the Women's Rugby League’s World Cup later this year, and York Sport, at the University of York, will be the training ground for both the women’s Australian and French Rugby League teams.

The event provided an opportunity for the children, aged between 10 and 11, from a selection of York primary schools, to take part in taster activity sessions where they tried several sports, including rugby, cricket, athletics, triathlon, hockey, boccia, tennis, netball, and football.

Players and athletes from across several sports talked to the children, alongside Julia Lee, the first female rugby league referee in the men's professional game; together with the school groups, she attended  the ‘Living with the Lioness’ exhibition, highlighting the history of women's Rugby League.

Tennis was also delivered by Rackets Cubed, an organisation working with York Sport to address activity and food hunger issues.

Head of Sport at the University of York, Keith Morris, said: “The idea for the event came from hearing paralympian Kadeena Cox say that “people can't be what they don't see”. It seemed appropriate to act on these words in a year of high profile sporting events, including the Rugby League World Cup in York.

“The day  was about children seeing and meeting  inspirational figures in a range of sports that they could have a go at, remember and hopefully be inspired by.”

The Day of Inspiration event was part of the Host Impact Day, which sees the Rugby League World Cup team visit towns and cities that will play host to the tournament.  York is host to the women's tournament in November.

Keith added: “We were delighted to see so many sports women represented at our event. It is going to be a great year for women in sport, with the Rugby League World Cup games, Euro Football, and commonwealth games, which I hope will continue to inspire engagement with sport for both women and men.”