A new archive featuring scripts, photographs and memorabilia belonging to the producer behind some of Morecambe and Wise’s greatest moments has been acquired by the University of York. 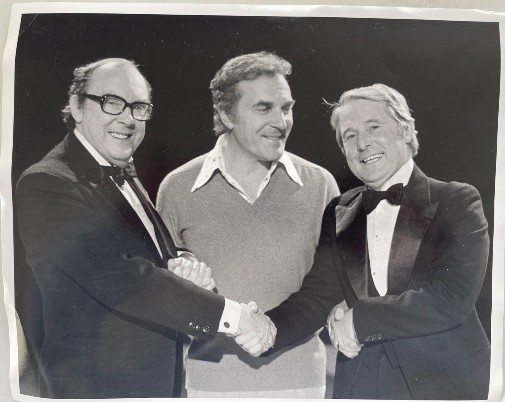 Ernest Maxin was the producer behind some of the comedy legend’s most famous shows,  including the famous kitchen-dance routine which was watched by 28 million viewers in 1977.

The archive documents Maxin’s career in show business which spanned over five decades and involved working with many other of the great comedians of his day including Les Dawson, Dick Emery, Charlie Drake, Dave Allen, Dave King and Jack Benny.

Photographs which show a young Maxin beaming at the camera and in later years meeting the likes of Princess Margaret at the launch of his musical ‘Barnardo’; plus the shiny gold envelope which revealed his BAFTA win in 1978, are highlights of the collection which offer an insight into the glittering career moments Maxin held dear.

Gary Brannan, Keeper of Archives and Special Collections, said: “It is an incredible privilege to work through this unique record of Maxin’s long and successful career and a joy to see original scripts containing jokes which have become part of the legacy of British humour.

“We are delighted to have Ernest’s archive here at York for everyone in the city to use and enjoy. There are many links and connections to other archives already held at the University, such as that of the comic actor Frankie Howard, who worked with Maxin in the 1950s. Together these precious collections provide a huge new source for research into comedy and what makes us laugh.”

The archive is open to the public for research and more details about the collection can be found here: https://borthcat.york.ac.uk/index.php/emax