Three scientists from the University of York’s Department of Chemistry have received prestigious Royal Society of Chemistry (RSC) awards. 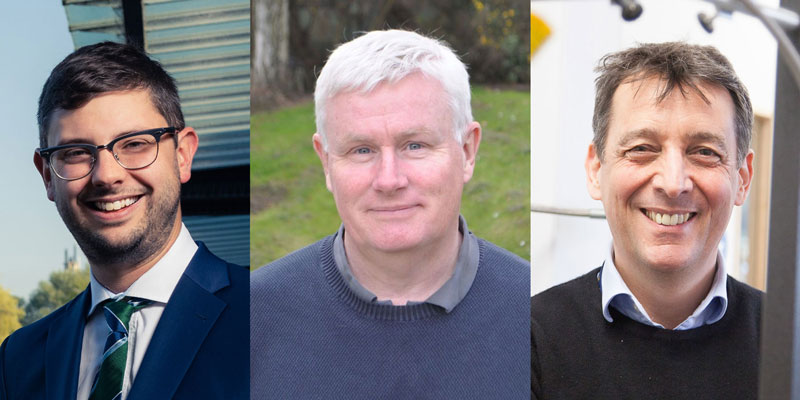 Dr Glenn Hurst has been named the winner of the RSC’s Higher Education Teaching Award - the fourth member of the chemistry department at York to win the award. Professors Paul Walton and Gideon Davies have been awarded the RSC’s Rita and John Cornforth Award.

Dr Hurst won his award for impactful work in green chemistry teaching resulting in national and international renown, and particularly for the innovative use of social media in higher education.

His work is centered around using innovative approaches to help students engage with and contextualise chemistry with an emphasis on green and sustainable chemistry, helping them address real-world problems as outlined by the United Nations Sustainable Development Goals.

After receiving the award, Dr Hurst said: “I wish to thank the brilliant students of Chemistry at York together with my inspirational and supportive colleagues across the institution. It is a real honour for me to receive such a prestigious award so early in my career and for that I am very grateful.

“Looking ahead, I am excited to see developments in interdisciplinary teaching strategies focused around global challenges and the potential use of virtual reality as a tool to support practical teaching and visualisation.”

The Walton-Davies team won their award for ground-breaking research into the extraction of sugars from cellulose to provide a rich source of sustainable biofuel known as cellulosic bioethanol. Cellulose is naturally resistant to break down into its constituent sugar molecules, which hinders its use as a feedstock for bioethanol. However, the team has focused research on a group of enzymes called lytic polysaccharide monooxygenases which significantly enhance the breakdown of cellulose, enabling it to be used as a feedstock for fuel production.

Professors Walton and Davies thanked the RSC for the award and said that they were accepting it on behalf of their many co-workers who have contributed to the insights gained into these enzymes over the past four years.

Each prize consists of a monetary award and a medal.

Dr Helen Pain, acting chief executive of the RSC said: “We live in an era of tremendous global challenges, with the need for science recognised now more so than ever – so it is important to recognise those behind the scenes who are making significant contributions towards improving the world we live in. It is our honour and privilege to do that with these awards, which recognise exceptional scientific achievement.

“The global chemical sciences community is one that covers many different specialisms, from health and climate change to product development, sustainable transport, and everything in between. In recognising the work of Professors Walton and Davies and Dr Hurst, we are also recognising the important contribution this incredible network of scientists makes to improving our lives every day.”

The RSC’s Prizes and Awards are awarded in recognition of originality and impact of research, or for each winner’s contribution to the chemical sciences industry or education. They also acknowledge the importance of teamwork across the chemical sciences, as well as the abilities of individuals to develop successful collaborations.