A study has uncovered the secret to why endangered whale sharks gather en masse at just a handful of locations around the world. 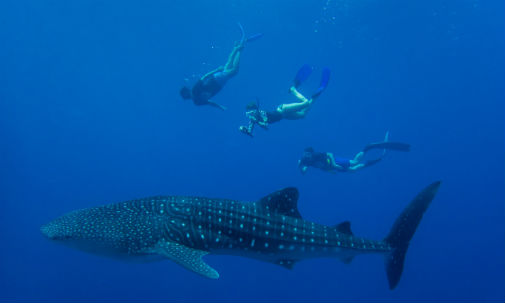 Gentle giants: Filter-feeding whale sharks do have around 3,000 tiny teeth, but are harmless to humans. Image credit: MWSRP.

The new insights into the habits of the world’s largest fish will help inform conservation efforts for this mysterious species, say the researchers.

Large groups of whale sharks congregate at only around 20 locations off the coasts of countries including Australia, Belize, the Maldives and Mexico. Why the sharks, which can reach more than 60 feet in length, choose these specific locations has long perplexed researchers and conservationists.

The new study, by researchers at the University of York in collaboration with the Maldives Whale Shark Research Programme (MWSRP), has found that the shark “aggregation sites” show many common characteristics - they are all in areas of warm, shallow water in close proximity to a sharp sea-floor drop off into deep water.

The researchers suggest that these sites provide the ideal setting for the filter-feeding sharks to search for food in both deep water and the warm shallows, where they can bask near the surface and warm up their huge bodies.

Supervising author of the study, Dr Bryce Stewart from the Environment Department at the University of York, said: “Sharks are ectotherms, which means they depend on external sources of body heat. Because they may dive down to feed at depths of more than 1,900 metres, where the water temperature can be as cold as 4 degrees, they need somewhere close by to rest and get their body temperature back up.

“Steep slopes in the sea bed also cause an upwelling of sea currents that stimulate plankton and small crustaceans such as krill that the whale sharks feed on.”

However, these perfectly contoured locations are not without their drawbacks due to human activity. Sharks swimming in shallow waters close to the surface are vulnerable to boat strikes caused by vessels ranging from large ships to tourist boats hoping to spot them.

Lead author of the paper Joshua Copping, who carried out the research while studying for a masters in Marine Environmental Management at the University of York, and is now working on a PhD at the University of Salford, said: “individual whale sharks can be identified by their unique pattern of spots and stripes which allows researchers to follow specific sharks that visit these aggregation sites. That means we have a good idea of the rate and extent of injuries at each of these locations and sadly it’s generally quite high.”

Boat strikes, along with accidental trapping in fishing nets, and the targeted hunting of the species for their fins and meat, have contributed to an alarming decrease in global whale shark numbers in the past 75 years.

By highlighting what makes these areas important to the whale shark, the researchers hope this study will also highlight the importance of managing these areas carefully in order to minimise human impact on the shark’s habitat and behaviour.

Dr Stewart added: “The more we know about the biology of whale sharks the more we can protect them and this research may help us to predict where whale sharks might move to as our climate changes.

“Not only do we have an ethical responsibility to conserve this miraculous animal for future generations, but they are also extremely valuable to local people on the coastlines where they gather, which are often in developing countries. While a whale shark can be worth as much as $250,000 USD dead, alive it can provide more than $2 Million USD over the course of its life span.”

Co-author James Hancock from MWSRP added; “Whale sharks can travel huge distances around the globe and the existence of such a small number of known aggregation sites suggested there had to be something about the depth and shape of the underwater terrain in these areas that makes them appealing.

"It’s very exciting to have narrowed down some of the key reasons why whale sharks choose these specific areas. However, the main focus of this research was on costal aggregations which are largely made up of young sharks – exactly where the rest of the demographic hang out is still unclear.”

Does bathymetry drive coastal Whale Shark (Rhincodon typus) aggregations? is published in the journal PeerJ and is a collaboration between the University's Environment Department and the Maldives Whale Shark Research Programme (MWSRP).