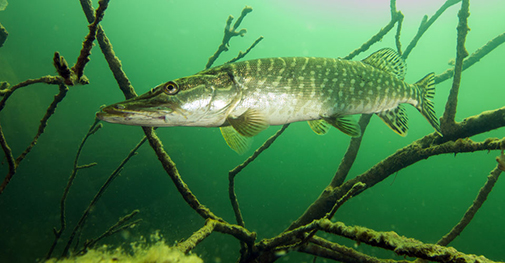 Pike is one of poet laureate Ted Hughes’ most celebrated works.

Pike is one of poet laureate Ted Hughes’ most celebrated works, but a paper by an academic at the University of York suggests some of the imagery for his fish may have been inspired by a 1914 work called The Pike by the American poet Amy Lowell.

In the paper, published in the journal Modernist Cultures, Dr Hannah Roche, from the Department of English and Related Literature, highlights the remarkable similarities in imagery, sequence and style between the poems.

Ted Hughes wrote Pike in Massachusetts in 1958 at a time when his wife, the poet Sylvia Plath, was reflecting on work by Amy Lowell – a prolific poet whose gender and sexuality made her unpopular in her lifetime.

Dr Roche said: “Although Hughes’ poem is more sinister in tone, a comparison of the two poems suggests Hughes fished out some of the imagery from the earlier work. His poem is about cannibalism – about one pike swallowing another.”

“This is an example of a celebrated male poet borrowing from a woman who was profoundly unpopular. Pointing out this unacknowledged debt matters because women’s work is so often undervalued and overlooked.”

Lowell was born in Massachusetts in 1874 and published more than 650 poems in her lifetime. She won the Pulitzer prize posthumously for her collection What’s O’Clock.

Dr Roche added: “However, by the end of the 20th century, Lowell’s poetry had been all but erased from modernism, with her name resurfacing only in relation to her dealings with Ezra Pound, her distant kinship with Robert Lowell, or her correspondence with DH Lawrence.

“Lowell was a talented poet who deserves a readership in her own right outside the world of feminist scholarship.”

The Ted Hughes estate deny the connection with Lowell’s poetry, saying Pike was inspired by Hughes’ childhood experiences of night fishing for pike in a pond by the site of an ancient monastery near his family home in South Yorkshire.

Myths, Legends, and Apparitional Lesbians is published in the journal Modernist Cultures.