A new study by the University of York and the Newcastle Business School (Northumbria University) has revealed the central role pubs play in creating economic development and social wellbeing in rural Ireland. 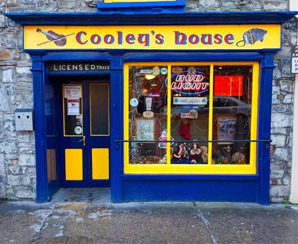 The report, prepared for the Vintners’ Federation of Ireland, highlights the significant contribution the Irish pub makes to the economy with 50,000 employed by Irish pubs and €60.7 million generated in wages alone.

The researchers also found the pubs surveyed used local suppliers regularly; calculations made on responses indicate a total of €2.1 million injected by pubs in their local supply chains, with each pub spending approximately €600 a month in local businesses.

The research was led by Dr Ignazio Cabras,a Fellow Member of the York Centre for Complex Systems Analysis (YCCSA) and Reader at Newcastle Business School, who was formerly a Lecturer with the York Management School at the University of York.

Dr Cabras said: “Pubs in rural areas of Ireland, as well as in the UK, play a significant role with regard to both economic and social development. In the countryside, a context with reduced opportunities in relation to business, employment and social engagement, pubs appear to ‘fill the gap’, functioning as incubators for a wide range of activities. The findings of this research corroborate most of the results gathered from our study on rural pubs in England conducted with the support of the British Academy, confirming that these places are not just mere businesses, but assets for the communities they serve.”

The qualitative findings by the researchers showed that local residents significantly value rural Irish pubs. They saw the closure of rural pubs as strongly associated with the decline of social drinking and increasing levels of alcohol consumption in private premises, fuelled by cheap prices available in the off-licence sector.

The majority of pub owner respondents surveyed indicated high levels of cost, with their revenue sunk into managing costs, mainly associated with employment, service rates, suppliers and taxation. Interviews conducted with pub owners and managers also identified costs associated with licensing, regulations and rates as significant burdens for their overheads.

Dr Cabras said: “Aside from the importance of pubs in relation to economies and supply chains in rural Ireland, this study has examined the significant role pubs play in local communities. Our findings clearly identify pubs as main centres for social activities and engagement, in a context frequently characterised by reduced facilities and opportunities. For instance, the majority of communal activities occurring in villages and rural parishes such as those related to clubs or sport teams are likely to originate in pubs or to be supported by publicans with financial and logistic resources.

“Publicans also support almost all volunteering initiatives and charity events. Local residents approached for this study frequently described publicans as ‘pillars’ and ‘sentinels’ of their communities, with pubs functioning as information centres as well as informal job-centres by matching demand and supply for local employment by using mostly word-of-mouth communication. In the light of these considerations, halting the decline of pubs in rural Ireland becomes even more relevant and urgent.”

Padraig Cribben, Chief Executive of the Vintners’ Federation of Ireland, said: “The Irish pub already accounts for 50,000 jobs and this report by the University of York highlights the massive role the pub plays in rural areas with an estimated €2.1 million injected by pubs in their local supply chains.

“As well as that, the Irish pub has played and continues to play a pivotal role in Irish tourism. Recent research shows that over 80 per cent of tourists use the pub for food and/or entertainment and it is the number one tourist attraction.”