An academic department at the University of York, which has played an influential role in broadening the scope of archaeology, has been awarded a Queen's Anniversary Prize for Higher and Further Education.

The Department of Archaeology at York has built on its reputation as the UK’s leading centre for medieval archaeology to acquire international standing in the study of prehistoric and later historical archaeology, archaeological computing, bioarchaeology, architectural conservation, heritage management and landscape research.

The Royal accolade announced at St James's Palace on Thursday 24 November, is the fifth to be conferred on the University in 15 years. Queen's Anniversary Prizes were awarded to the University in 1996 for the excellence of its work in Computer Science, in 2005 for the pioneering work of CNAP (Centre for Novel Agricultural Products) in Biology, in 2008 for the contribution made by the Centre for Health Economics for the way it has helped to shape public health care and again in 2009 for the Social Policy Research Unit’s role in developing policies to support vulnerable people in society.

Introduced following the 40th Anniversary of the Queen's reign in 1992, the prizes rank alongside the Queen's Awards for Industry. They are given biennially for "work of exceptional quality and of broad benefit either nationally or internationally."

The Department pioneered the Archaeology Data Service and is involved in groundbreaking work in digital archaeology. Its research spans from the origins of mankind to ‘the archaeology of the contemporary past’ - landscape shaped over time to the present day by human lives and experiences. Its bioarchaeology has achieved innovations in DNA and biomolecular dating while the Department has also promoted British archaeological methods abroad, investigating early farmers and first towns in East Africa, and recovering evidence for early settlements on the coastal shelf of the Red Sea.

The Head of Archaeology at York, Professor Julian Richards, said: “This award is a wonderful tribute to the hard work and level of excellence achieved by all staff and students in the Department, in teaching and research. Successive graduate cohorts have placed us at the top of the polls in the National Student Survey. Colleagues have won record levels of research grants and we have brought substantial European research funding to York. The work of the Archaeology Data Service has had a major impact on archaeology nationally, and is now being emulated overseas.” 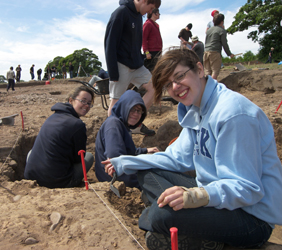 The University's Vice-Chancellor, Professor Brian Cantor, said: “Archaeology at York has an international reputation for its ground-breaking work across a broad spectrum of archaeological endeavour. From its role in the investigations at Sutton Hoo and the unique Mesolithic settlement at Star Carr in North Yorkshire to its cutting edge developments in bioarchaeology and establishment of the national Archaeology Data Service, it has been in the forefront of significant advances in the discipline.

“The Department plays a seminal role in the wider community, working with national organisations, museums, galleries, and sites to encourage public awareness of the human heritage. It is, in every sense, a centre of excellence.”