Reconstructing human population sizes of the past

Earth's population has grown from 3 - 8 billion people over the last 70 years, a shift that has led to a significant increase in global consumption, a more urban population, extensive landscape conversion and a rapidly changing climate.

The genus of our species, Homo, departed from other hominid genera just over two million years ago and modern humans (us!), Homo sapiens, emerged in Africa no later than 200,000 years ago, likely earlier (Fig. 1). 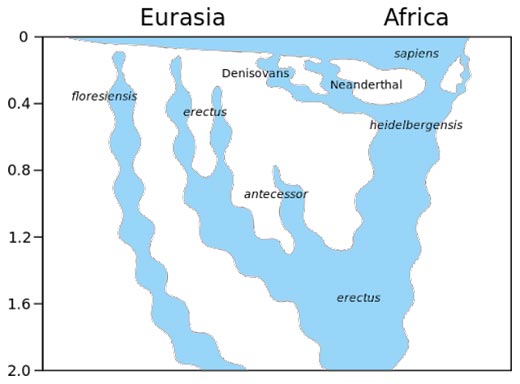 Figure 1 - The evolution of our species, Homo sapiens. The blue, wobbly areas indicate gene flow through time. Notice the gene flow between Denisovans/Neanderthals and sapiens (Figure from Stringer, 2012: https://www.nature.com/articles/485033a)

Whilst we clearly do not have census data spanning the last 200,000 years, our genes offer a window into past population sizes, alongside knowledge of migrations and the interbreeding of our species with now-extinct species of humans (Fig. 1). Genomic analyses suggest that for the majority of our time in existence, H. sapiens have existed in very low numbers, with the global population estimated to have remained well below 50,000 individuals at any one time. Whilst the relatively low numbers of ancient human species and early modern humans certainly modified their environments, it is the period since the end of the last ice age, the Holocene, that human populations have reached a sufficient size to become a major driver of environmental, climate and biodiversity change. So over this more recent period, what data can we use to reconstruct changes in past human populations? Some archaeologists suggest that the archaeological record might be of use!

Archaeologists are interested in studying past human societies by excavating items that past societies left in the ground on purpose (like a human burial), or by accident (like an animal carcass, or a discarded tool). Archaeologists commonly attribute ages to objects (e.g. a bronze axe head) and features (e.g. a fireplace) using radiocarbon dating and some archaeologists argue that the frequency of radiocarbon dates through time tells us something about human population. The greater the number of objects/features in the archaeological record at any point in the past, the greater the amount of human activity and therefore the larger the human population, so the argument goes. By the same token, fewer radiocarbon dates indicates periods of lessened human activity and lower human populations.

Earlier this year, a team of US and German researchers published a database of global radiocarbon dates in the science journal Nature. Fig. 2 plots frequency of European dates from this database from 12,000 years ago to the present. It indicates that European populations remained low from 12,000 - 8000 and expanded 8000 - 3500 years ago. These inferred European population increases are associated in time with the expansion of agriculture into the region and with the innovation of new technologies, such as bronze. 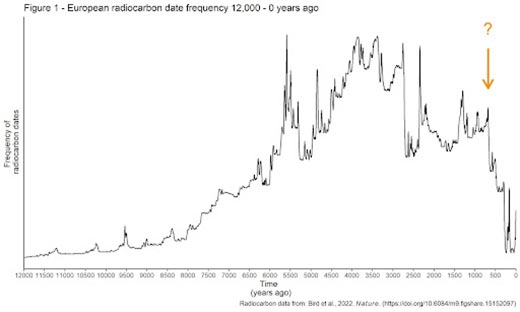 Figure 2 - The frequency of European radiocarbon dates over the Holocene (12,000 years ago to the present).

This trend in the radiocarbon data corroborates previous work over the last century that associates these major cultural changes - farming, bronze innovation, etc. - with population increases. However, after the peak between 3500 and 4000 years ago, Fig. 2 indicates that European population size fluctuated but overall declined to the present day, with the most rapid decline in population after around 700 years ago. Whilst there were indeed significant events that reduced the European population over this time period (cultural shifts, the great famine, plagues), we know that overall, European population has grown over the last 4000 years. In particular, we know that during the height of the Roman Empire, around 2000 years ago, population levels were relatively high compared to the period that immediately followed it, the so-called “Dark Ages”. So why doesn’t Figure 1 show this?

Given these drawbacks, where does this leave researchers interested in biodiversity change, and human impact on it, over the Holocene and beyond? The frequency of radiocarbon dates through time provides an estimate of past human populations based on empirical data and can be subjected to scientific tests like any other data source and no data source is ever infallible - even national population records are never 100% accurate. So, by accepting some of the limitations, mitigating against them as far as possible and by looking only at long term trends, radiocarbon data offer a relatively new and exciting method for understanding past human population change, and will hopefully allow a greater understanding of biodiversity changes in the past.