Professor Robert Costanza and Dr Ida Kubiszewski talk Ecological Economics and how it can help create a prosperous, just, equitable and sustainable future.

Our just published book from Edward Elgar: Sustainable Wellbeing Futures: a Research and Action Agenda for Ecological Economics  lays out an alternative approach to understanding and managing our planet that places the sustainable wellbeing of humans and the rest of nature, rather than the mindless pursuit of GDP growth at all costs, as the overarching goal. Each of the book’s 26 chapters, written by a diverse collection of 70 scholars and practitioners (including LCAB’s own Robert Costanza, Ida Kubiszewski, and Kate Pickett) outlines a research and action agenda for how this future can look and possible policies and actions for its realization.

Ecological Economics (EE) is a transdisciplinary field that integrates the study and management of the human economy embedded in society and the rest of nature.  It acknowledges the biophysical realities of a finite world and the need to create a fair and just society focused on sustainable wellbeing.  It acknowledges that the planet we live on is a complex, interdependent system and it must be understood and managed as such.  This is a far different perspective than current mainstream economics, but a critically important one if we hope to achieve sustainable wellbeing in the human-dominated Anthropocene epoch that we now inhabit. 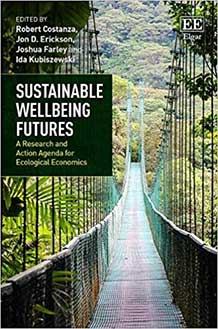 EE has intellectual roots that go far back, but its formal establishment as an academic field began over 30 years ago with the formation of the International Society for Ecological Economics (ISEE) in 1988.  The Society’s journal, Ecological Economics, published its first issue in February 1989.  The first major international conference was held in 1990 followed by a meeting that resulted in an edited book laying the groundwork for the field (Costanza, 1991).  The first chapter synthesized the “Goals, agenda, and policy recommendations for ecological economics” (Costanza et al., 1991).  The current volume, almost three decades later, is an effort to update and re-evaluate that research and action agenda.  Much has changed, but much is the same – in particular the basic transdisciplinary, co-evolutionary, whole systems, intelligently pluralistic worldview of ecological economics and its commitment to building a sustainable future focused on the wellbeing of humans interdependent with the rest of nature.

This commitment to intelligent pluralism means that the field contains and welcomes diverse perspectives on the issues and diverse agendas for research and action.  But they share the overarching goal of creating a sustainable wellbeing future – a future that focuses on a broader conception of wellbeing than merely maximizing income and consumption – a future that acknowledges the many and diverse contributors to wellbeing and the interdependence between the wellbeing of humans and the wellbeing of all life on Earth.

This book is thus a collection of chapters from a diverse cross-section of researchers and practitioners who share this overarching goal.  It includes contributions from both established researchers and those new to the field.

The book benefited from:

We now live in a world where the magnitude of human impacts on our ecological life support system is so great that it is changing the functioning and sustainability of that system. Current mainstream economics was developed in an era before we had reached that level of global impact.  We can’t live in that past and ecological economics gives us the perspective and tools to build the future we all want – a future that is prosperous, just, equitable and sustainable.