Glenn Hurst, from the Department of Chemistry, has been recognised as one of the top 10 UK social media superstars by Jisc (formerly the Joint Information Systems Committee) in a competition celebrating the excellent social media work being done in Higher Education (HE). 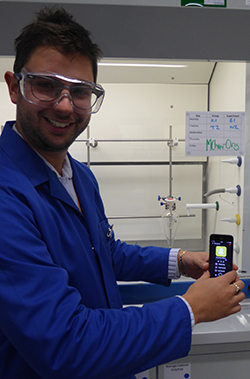 Glenn was recognised for his innovative use of social media to enhance his teaching. The judges were particularly impressed by Glenn’s use of Snapchat to signpost students during inductions. Glenn sends students a blend of annotated pictures and videos to allow them to contextualise the chemistry concepts taught in lectures to the real world. In doing so he also provides students with a glimpse how chemistry research is conducted in laboratories in the department and beyond. Student feedback includes “It’s super fun to see research in chemistry labs!”

He also uses Twitter to engage with students and the academic community and empowers students to create their own YouTube videos of organic chemistry mechanisms. Students then tweet their videos to him to receive feedback so they can improve. Glenn says “This approach has allowed me to provide students with even more feedback than other approaches such as tutorials or workshops and enables them to improve their communications skills.”

Other award winners included academics making use of a wide range of social media platforms, from Facebook Live and Instagram, to developing their own bespoke apps for student learning. Pablo the University of Portsmouth’s library penguin was also recognised for being a trustworthy source of information on Twitter and a YouTube entertainer.

The winners receive an edtech visit for their class from DigiLab, so expect to see a robot visiting the Department of Chemistry soon. The award was made by Jisc, a UK not-for-profit company, which supports post-16 and HE by providing relevant and useful advice, digital resources and network and technology services. The winners were chosen by a panel of HE and social media experts, including the Jisc social media team, Jisc’s Head of Student Experience and the social media editor for Times Higher Education.

The Department of Chemistry at York is committed to teaching innovation and excellence as demonstrated in our second place ranking in the 2018 Guardian League Table.