This report shows how the build-up of greenhouse gases (GHGs) and the resulting global warming pose major environmental threats to Asia's water and food security.

Carbon dioxide (CO2), methane, nitrous oxide, halocarbons and ozone in the lower atmosphere (below about 15 km) are the major gases that are contributing to the increase in the greenhouse effect.

In a similar fashion, increasing amount of soot, sulphates and other aerosol components in atmospheric brown clouds (ABCs) are causing major threats to the water and food security of Asia and have resulted in surface dimming, atmospheric solar heating and soot deposition in the Hindu Kush-Himalayan-Tibetan (HKHT) glaciers and snow packs.

These have given rise to major areas of concern, some of the most critical being observed decreases in the Indian summer monsoon rainfall, a north-south shift in rainfall patterns in eastern China, the accelerated retreat of the HKHT glaciers and decrease in snow packs, and the increase in surface ozone.

All these have led to negative effects on water resources and crop yields. The emergence of the ABC problem is expected to further aggravate the recent dramatic escalation of food prices and the consequent challenge for survival among the world's most vulnerable populations. Lastly, the human fatalities from indoor and outdoor exposures to ABC-relevant pollutants have also become a source of grave concern. 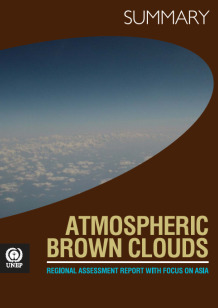