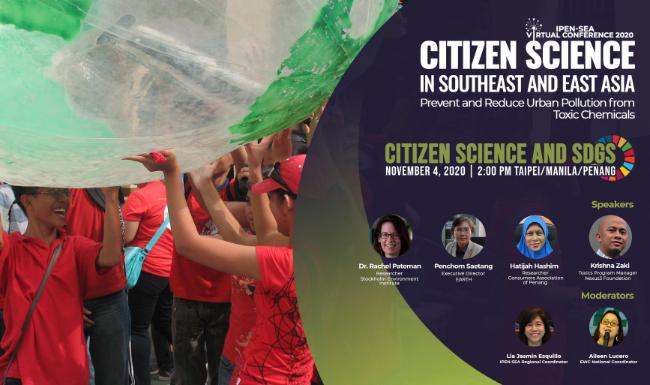 The participation of non-professional scientists in scientific research or monitoring efforts can empower grassroots organizations and movements into advancing a sustainable and toxics-free future for all.

Citizen science, as it is generally called, has become a strategic tool enabling communities impacted by chemical and waste problems to empower themselves with data and information that can be used to assert their rights to a healthy and safe environment.

An online regional conference has put the spotlight on the application of citizen science to address such problems affecting mostly poor and marginalized communities, with children, pregnant women and workers at greater risk. It has brought together citizen science advocates, practitioners and learners from across the globe.

The regional event that is taking place amid the COVID-19 pandemic is led by the International Pollutants Elimination Network – Southeast and East Asia (IPEN-SEA) and co-organized by Nexus 3 Foundation-Indonesia, EcoWaste Coalition-Philippines and the Ecological Alert and Recovery-Thailand with support from the Stockholm Environment Institute (SEI).

“Through the years, citizen science has developed into a practical and potent tool for helpless victims who often suffer in silence from the destructive pollution caused by powerful commercial and industrial interests,” noted Penchom Saetang, Executive Director of EARTH and a citizen science practitioner for over 20 years.

“By developing their scientific knowledge, technical skills and critical abilities, pollution victims, or survivors rather, have found their voice and are able to use the results of their own studies to negotiate with polluters, defend their human rights in courts and advocate for policy reforms,” she said.

In the first of four webinars held in November, examples of citizen science efforts in Indonesia, Malaysia and Thailand were presented. Among these efforts were the monitoring of mercury concentrations in air in several healthcare facilities in Denpasar City in Bali, Indonesia, which eventually led to the issuance of a government policy withdrawing mercury-containing medical devices; the screening of playground equipment for lead content in Penang, Malaysia, which further drew attention to the urgency of adopting a regulation banning lead in paint; and the air sampling in Rayong Province, Thailand that detected excessive levels of air pollutants, including cancer-causing benzene and vinyl chloride, which prompted the government to issue a notification on the annual standard level of volatile organic compounds in ambient air for nine highly toxic chemical compounds.

"The topic of how citizen science can be used in the context of the Sustainable Development Goals (SDGs) is growing in momentum", said Rachel Pateman, a researcher at SEI's York centre at the University of York. The SDGs, which member states of the United Nations adopted in 2015, seek to end poverty and other deprivations, improve health and education, reduce inequality and spur economic growth, all while tackling climate change and preserving marine and terrestrial biodiversity.

“Citizen science can help in filling the data gaps to monitor the SDG indicators and in localizing indicator monitoring, especially in under-reported areas. It can help to bring to the fore issues of importance or concern to local communities that may have been missed in higher level discussions. And, it can also be a way to bring together different stakeholders, including citizens, to build shared understanding of and co-develop solutions to sustainability challenges,” she said.

“There is lots of potential for citizen science to be used to monitor, localize, define and implement the SDGs, but there are some critical challenges that need to be addressed in order for this potential to be realized,” she added.