A student leader at a university in Ukraine who set up a series of virtual networks so that students could stay connected during the war has been honoured by the University of York. 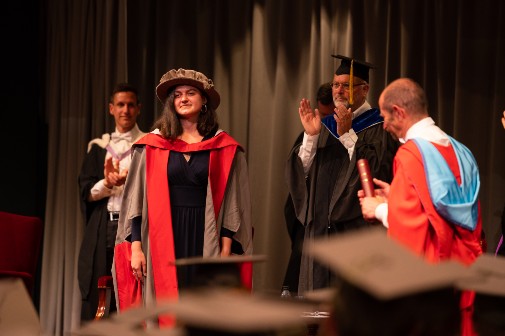 Vitalina Schevchenko was in York to collect her award

Vitalina is one of eight people from the worlds of media, business, politics, and academia recognised with honorary degrees by the University in the July ceremonies this year.

Vitalina, along with many of her peers, was forced to flee as her University came under heavy bombardment during the war.

Forced to relocate to Spain, Vitalina was determined her peers should not miss out on their education and set about creating a series of virtual networks so that students could stay connected.

Her network enabled her university to identify which students needed emergency housing and other forms of support.

The fourth year BA student in International Economy continues to use these networks to check on the safety of students, keeping them connected to their education and allowing them to share their experiences.

Vitalina is also a Young European Ambassador, working to help raise awareness about the EU’s cooperation with its Eastern partner countries, and is also involved in civic activism.

The University of York invited Vitalina to visit York to join her ceremony and the celebrations in person.

Vitalina, who represents around 20,000 students at Kharkiv University, said: “It was nice to be here in York to receive this honour in person, and meet so many of the people that have been supportive of me and my fellow students.

“This recognition is not only for me, but for all Ukrainian youth that are facing dramatic problems, but nonetheless wishing to continue their educational process and never stop learning.

“These are tremendously challenging times, but it is comforting to have these moments of celebration and connect with students, who may not be experiencing such a crisis, but who nevertheless share the same ambitions as Ukrainian students - to learn as much as they can to be able to contribute not only to their own successful future but also to the development of their country.”

The signing of a Memorandum of Understanding (MoU) between the two institutions will lead to a number of initiatives, including staff fellowships, support for Kharkiv in the management of their cultural heritage, summer schools and short courses and connections between the student unions.

UK universities are being matched with Ukrainian institutions as part of a twinning initiative to offer support to academics, students and university leaders during the conflict.

Deputy Vice-Chancellor at the University of York, Professor Saul Tendler, said: “Vitalina has been so remarkable in the way that she has brought people together in a time of crisis and remained honest, yet optimistic, as she rallied her fellow students when all seemed lost.

“Her actions during this time have been inspiring, and she has been unwavering in her focus to rebuild and continue to provide access to learning for Ukrainian students.

“We honour her for her bravery and determination and thank her for the time and wisdom she has shared with York students and the wider community.”