Historic devolution deal has been signed with York and North Yorkshire

A historic devolution deal, putting greater power into the hands of local communities in Yorkshire, has been signed by the Levelling Up Secretary Greg Clark. 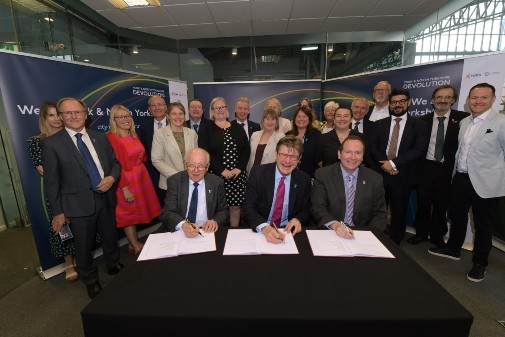 Professor Charlie Jeffery, Vice-Chancellor and President of the University, (fourth from the left) was part of the signing event that took place today (1 August). The deal was signed by Cllr Carl Les, Leader of North Yorkshire Council, Greg Clarke MP, Secretary of State for Levelling Up, Housing and Communities and Cllr Keith Aspden, Leader of City of York Council.

The devolution deal means that over half a billion pounds will be transferred from central government to York and North Yorkshire, to be invested according to local priorities.

The deal includes a commitment to support the development of BioYorkshire. Led by the University of York, Askham Bryan College and Fera Science, BioYorkshire aims to drive green innovation and sustainable growth in the region.

Professor Charlie Jeffery, Vice-Chancellor and President of the University, was part of the signing event that took place today (1 August) as the county celebrates Yorkshire Day.

Professor Jeffery said: “Devolution secures significant investment and powers for our region, which will help us to address many of the challenges we face locally and ignite innovation and growth.

“The support for BioYorkshire outlined in the deal will play a crucial role in delivering the benefits of devolution. It will boost the partnership’s ambitious green agenda to create jobs, lift the regional economy and support North Yorkshire’s goal to become one of the first areas in the UK to be carbon negative.”

The Department for Levelling up, Housing and Communities is delivering the deal, which will create a new combined authority across the region with a directly elected mayor.

The mayor will have powers to better address specific needs within the region by investing in transport, housing, and education, and will be handed £540 million by the government over the next 30 years.

York and North Yorkshire is the first city and rural region to see devolution on the scale enjoyed by the core city regions including South and West Yorkshire.

Levelling Up Secretary Greg Clark MP said: “Yorkshire Day 2022 is an historic one. It marks the return of powers and resources from London to much of the historic North Riding.

“Levelling up – driving prosperity and opportunity in all parts of Britain – is done best when people locally can forge the future of their area. This deal is a big step in that direction.”

Other key features of the deal include: