Researchers have created a comic about green and sustainable chemistry research which will be given to all of York’s primary schools. 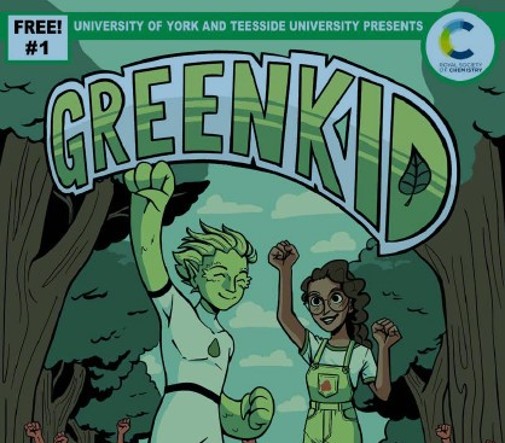 Developed by academics at the University of York and Teesside University, “Green Kid” aims to boost enthusiasm about science in children aged between 9 and 12.

The project is funded by the Royal Society of Chemistry and will ensure every primary school in York will be given 30 copies along with a teacher pack with extra learning materials.

The comic, set in 2064, sees the character Green Kid go back in time to the 2020s where they meet their inventor Summer as a child to see how scientific research to create green solutions and a circular economy could save the world from the ravages of climate change.

The comic, which also includes educational games and puzzles, focuses on the sustainable solvent Cyrene™  - which was discovered by York researchers in 2014. The bio-based chemical can be used to sustainably manufacture a range of products from lithium batteries and carbon fibre bicycles to medicines.

Made from sawdust, Cyrene™  is safe, sustainable, recyclable and does not harm the environment. A company called Circa is building a plant in France to produce Cyrene™  and will sell it to manufacturers to replace toxic solvents.

Dr Rob McElroy, from the Department of Chemistry at the University of York, is one of the researchers behind the comic and a co-inventor of Cyrene™ .

He said: “I have a love of comics and visual arts and have wanted to use them to help get across the exciting world of Green Chemistry for a long time. When I met Julian Lawrence from Teesside University, we talked about how he wanted to use his art to help inform the public about scientific research and we realised we could work together.

“We really wanted to show kids that science isn’t boring and the comic gets across some exciting scientific concepts, that aren’t usually introduced until degree level, in a simple way.

“The plot is centred around the climate crisis, but with a hopeful message that scientists are working hard to come up with solutions like Cryene™. Through the characters, we also wanted to reflect the fact that Chemistry at York is a diverse place, with an equal number of women and men undertaking a PhD, and with researchers from all over the world.”

Co-creator of the comic, Julian Lawrence, Senior Lecturer in Comics, Graphic Novels and Sequential Arts at Teesside University, added: “Comics and illustrations are always a great way to engage, enthuse and educate a young audience on an important issue or topic.

“This has been a really interesting project to be involved with – showcasing the expertise here at Teesside University and the impact comics can have. I am delighted to see that this will be distributed to primary schools in York and hope it helps get the message across.”

The researchers have tested what children and their teachers think about the comic at two schools in York - Acomb Primary Academy and All Saints. Teachers read the comic with their classes and did a lesson around its key themes including an experiment with sugar, starch and cellulose to demonstrate the power of solvents.  Feedback from the schools suggests that pupils had an increased understanding of words like sustainable and solvent after this session.

Alice Hurd from All Saints RC School said: “The pupils really enjoyed having something slightly different in their science lessons. We spent a few lessons working with the comic, including doing some practical work related to the topics covered, which the students really were really engaged with. As a teacher, it was fantastic to be able to do something off the curriculum and was timed really nicely that when we did work with the comic it was during science week, so could make links to that as well.”

Tom Dennis from Acomb Primary Academy added: “The comic had a real impact on the children’s subject knowledge and confidence when discussing key issues in relation to climate change. Not only did the comic engage them, with the approachable character Green Kid, but was informative also, sharing key statistics such as the increase of global temperature and how processes, such as the production of Cyrene, can help improve the situation.

“When asked after finishing the comic what could be improved, all children were unanimous - they wanted another one! A real, ringing endorsement and this was mirrored in the work they produced. We are delighted to have been involved in the project and look forward (hopefully) to further editions to come”

The researchers are now seeking further funding for another two issues of the comic.