The ability of the world’s tropical forests to remove carbon from the atmosphere is decreasing, according to a study published in Nature. 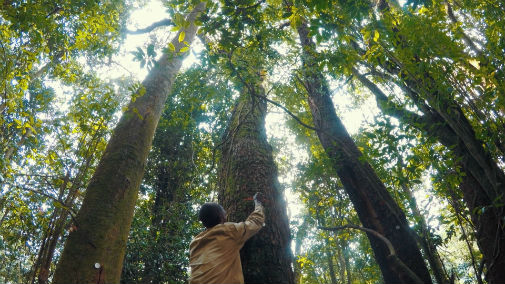 An international team of researchers, including scientists from the University of York, tracked 300,000 trees in more than 500 forest patches in Africa and the Amazon for over 30 years. Their work reveals that tropical forests will soon change from slowing climate change to accelerating it.

Intact tropical forests are well-known for being a crucial global carbon sink, slowing climate change by removing carbon from the atmosphere and storing it in trees, a process known as carbon sequestration. Climate models typically predict that this tropical forest carbon sink will continue for decades. However, this new study highlights that the overall uptake of carbon into Earth’s intact tropical forests peaked in the 1990s.

Co-author Dr Aida Cuni-Sanchez from the Department of Environment and Geography said: “By the 2010s, on average, the ability of a tropical forest to absorb carbon had dropped by one-third.

‘’The study by almost 100 institutions provides the first large-scale evidence that carbon uptake by the world’s tropical forests has already started a worrying downward trend.”

Study lead author Dr Wannes Hubau, working for Royal Museum for Central Africa in Belgium said: “By combining data from Africa and the Amazon we began to understand why these forests are changing, with carbon dioxide levels, temperature, drought, and forest dynamics being key.

“Extra carbon dioxide boosts tree growth, but every year this effect is being increasingly countered by the negative impacts of higher temperatures and droughts which slow growth and can kill trees. Our modelling predicts that tropical forest will stop being a carbon sink and become a carbon source in the mid-2030s.”

Senior author Professor Simon Lewis, from the School of Geography at the University of Leeds, said: “Intact tropical forests remain a vital carbon sink but this research reveals that unless policies are put in place to stabilise Earth’s climate it is only a matter of time until they are no longer able to sequester carbon. As tropical forests are likely to sequester less carbon than predicted, carbon budgets and emissions targets may need reassessing to account for this.’’

The authors also highlight the importance of forest monitoring. These unexpected findings presented in the Nature paper were obtained because scientists started monitoring tropical rainforests 30 years ago, through two large research networks of forests observations across lowland tropical forests in Africa (AfriTRON) and Amazonia (RAINFOR).

Dr Aida Cuni-Sanchez is now working on a new network of forest observations across montane forests in Africa. These forests  - found in mountainous areas - are even more threatened by predicted changes in climate.

The paper ‘Asynchronous Carbon Sink Saturation in African and Amazonian Tropical Forests’ is published in Nature.