Conservationists may be forced to relocate cold-loving butterflies over next 50 years, study reveals

Some of Europe’s native butterflies may have to be moved to colder climes if they are to survive global warming, a new study suggests. 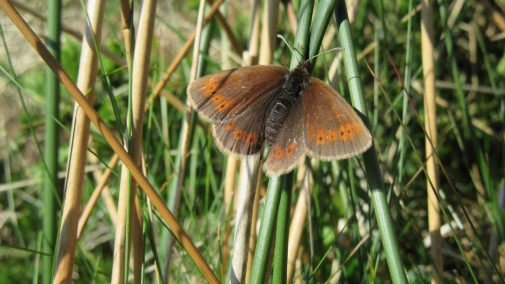 The University of York study tracked the impact of changes in climate on the genetic diversity of the mountain ringlet butterfly over the 21,000 years since the last ice age.

The study suggests that future conservationists may have to evacuate some populations of butterflies to cooler habitats, higher up in mountains or further north in places including Scotland, Scandinavia and the Alps.

The findings reveal that current predictions of a rise in temperatures of 2-3 degrees Celsius by 2070 would lead to a loss of the unique genetic diversity in the species, reducing their ability to adapt to rising temperatures or relocate to cooler habitats on their own.

The results are likely to be true for other cold-adapted and mountain-dwelling butterflies in Europe such as the yellow-spotted ringlet, bright-eyed ringlet and the dewy ringlet.

With many hills and mountains across Europe set to become too warm, conservationists may need to help some cold-loving species move to areas such as Scotland, Scandinavia and the Alps, which, may provide the right conditions in the future for them to thrive, the authors of the study say.

Lead author of the study, PhD researcher Melissa Minter from the Department of Biology at the University of York, said: “Genetic diversity is so important to the survival of a species, particularly in the face of climate change, because the greater the variation in genes, the more likely is that individuals in a population will have the genetic capacity to adapt to changes in the environment.

“Our study shows how past climatic events have shaped unique genetic diversity across the populations of the mountain ringlet, and the impact that current and future climate change is likely to have.

“With the genetic diversity of cold-adapted butterflies so at risk in our warming world, conservationists may have to take more controversial steps – such as the relocation of populations – in order to ensure their long-term survival into the future.”

By examining the DNA of populations of mountain ringlet butterflies across Europe, the researchers traced how the butterfly was distributed throughout the continent during the last ice age. Populations occurring in ice age refugia in different mountain areas became isolated from other butterflies of the same species and increasingly genetically diverse.

The study reveals that the mountain ringlet arrived in the UK in two separate colonisation events after the vast ice sheet covering the UK melted. Modern populations of the butterfly in England are particularly genetically diverse and the threat posed to them by climate change means that a large portion of the species genetic diversity could be lost.

The threat is particularly high for butterflies living at less than one thousand metres below sea level, the researchers say.

Prof Jane Hill, a co-supervisor of the project said: “As the climate warms up, cold-loving butterflies on mountain tops will have nowhere to go. Many butterflies will not be able to reach cooler locations themselves, and so conservationists could give these mountain butterflies a helping hand.”

Natural England’s Principal Climate Change Specialist, Mike Morecroft, added: “Climate change is one of the most serious challenges for nature conservation today and good science is essential to developing an effective response.

“Cold-loving species in the uplands, such as the Mountain Ringlet, are amongst the most vulnerable species to rising temperatures in England. This study provides a unique insight into the importance of local genetic diversity, which will help us to assess the best options to protect these species going forward.”

Past, current and potential future distributions of unique genetic diversity in a cold‐adapted mountain butterfly is published in Ecology and Evolution.