Chimpanzee lip-smacks exhibit a speech-like rhythm, confirming that human speech has ancient roots within primate communication, according to a new study. 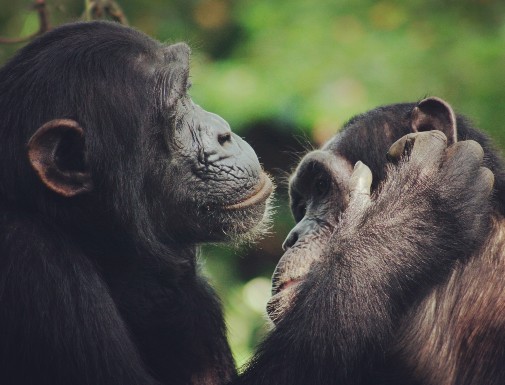 The study, by researchers from the Universities of York, St Andrews and Warwick, found that, like every human language in the world, chimpanzees produce lip-smacks at a speech-like rhythm of close to five open-close mouth cycles per second.

Previous research had already identified fast-paced mouth signals with a speech-like rhythm in orangutans and several other monkey species, but until now there has been no evidence from African apes, who are more closely related to humans.

The findings suggest the vocal systems in human speech have their origins in these primate mouth signals, offering answers to the long-standing puzzle of how human speech evolved.

Co-author of the study, Professor Katie Slocombe, from the Department of Psychology at the University of York, said: “Our findings that chimpanzees produce rhythmic facial movements at a comparable rate to human speech form an important piece of the puzzle concerning how human speech evolved.

“Our study suggests that human speech has deep evolutionary roots and likely ‘piggy-backed’ on rhythmic facial movements that existed in our shared ancestors with other primates.”

The researchers looked at data from four chimpanzee populations - two wild and two held in captivity. Their speech was analysed through video recordings collected at Edinburgh Zoo and Leipzig Zoo, and recordings of wild communities including the Kanyawara and the Waibira, both in Uganda.

Lead author of the study Dr Adriano Lameira, from the University of Warwick, added: “Our results prove that spoken language was pulled together within our ancestral lineage using ‘ingredients’ that were already available and in use by other primates and hominids.

“We found pronounced differences in rhythm between chimpanzee populations, suggesting that these are not the automatic and stereotypical signals so often attributed to our ape cousins. Instead, just like in humans, we should start seriously considering that individual differences, social conventions and environmental factors may play a role in how chimpanzees engage “in conversation” with one another.

“If we continue searching, new clues will certainly unveil themselves. Now it’s a matter of mastering the political and societal power to preserve these precious populations in the wild and continue enabling scientists to look further.”