Is Jane Austen as romantic as her readers think she is or could she be a good antidote to Valentine's Day? Dr Emma Major, from the University of York's Centre for Eighteenth Century Studies, discusses Austen's depiction of marriage in one of her most celebrated works, Sense and Sensibility. 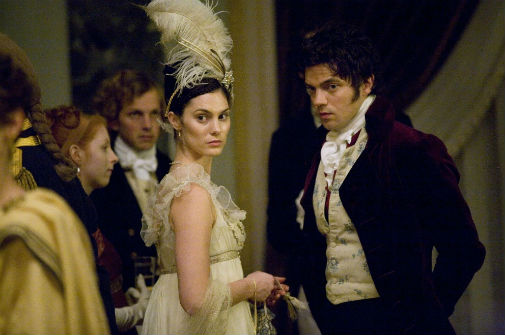 Not all marriages in Jane Austen's novels were a success. Image courtesy of BBC drama.

"How romantic (or Romantic) IS Jane Austen?

"Delightful and longed-for unions conclude her novels, but how many existing happy marriages are there in her stories? For someone whose Hollywood popularity has made her a byword for romance, Austen gives us only glimpses of mature happy marriages.

"Sense and Sensibility (1811), indeed, provides us with a heroine whose glorious love-affair goes wrong and who ends up marrying, ‘with no sentiment superior to strong esteem and lively friendship’, a man she had dismissed as elderly at the start of the novel, and who at the great age of thirty-five wears decidedly unheroic prophylactic flannel waistcoats.

"As Austen concludes, ‘Marianne Dashwood was born to an extraordinary fate’: adamant at seventeen that no-one could fall in love twice – despite the fact she herself was born to a second marriage – she comes to see that second attachments are possible after all.  Both the Dashwood sisters marry men who have loved others before.

"The novel contains cautionary tales for those who have been imprudent in their choices, and Chapter two consists of a brilliant dialogue in which we see how a manipulative wife can sway her husband. We are told that John Dashwood might have been a better man had he married a more amiable woman, but his partner determined his fate.

"That most famous of incompatible marriages, the Bennets’ in Pride and Prejudice (1813), is foreshadowed in the Palmers. Like Mr Bennet, Mr Palmer has ‘found himself the husband of a very silly woman’, and we are invited to reflect on the ‘strange unsuitableness that so often existed between husband and wife’.

"So if you dismissed Austen as romantic fluff, give her sly wit another go – and this Valentine’s Day, remember her useful advice: beware of handsome young men on horses, and don’t give up on the possibility of a second attachment."