If this surprisingly hot British summer has you fighting off unwelcome armpit aromas, you’ll be pleased to learn that science has just brought us a step closer to blocking body odour (BO). 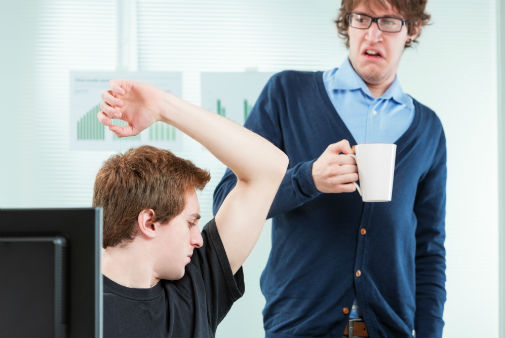 The findings could result in more effective deodorants

Researchers have unravelled a key part of the molecular process by which armpit bacteria produce the most pungent component of the noxious smell we recognise as BO.

The findings could result in more effective deodorants with targeted active ingredients, the researchers suggest.

The role of microbes, specifically bacteria, in the production of BO has been known for some time and scientists at the University of York recently made the discovery that a small number of species of Staphylococcus bacteria are responsible for the formation of the most pungent component of the whiff in our pits.

However, little has been understood about the process by which these bacteria are able to take up odourless compounds, which we secrete into our underarms when we sweat, and convert them into pungent volatile chemicals.

In a paper published in the journal eLife, the researchers from the University of York, in partnership with colleagues at the University of Oxford, have deciphered the first step in this process by identifying and decoding the structure of the molecule - known as a “transport” protein - that enables bacteria to recognise and swallow up the odourless compounds secreted in sweat.

Solving the structure of the protein means that a new generation of deodorants could now be developed to disrupt its function.‌ 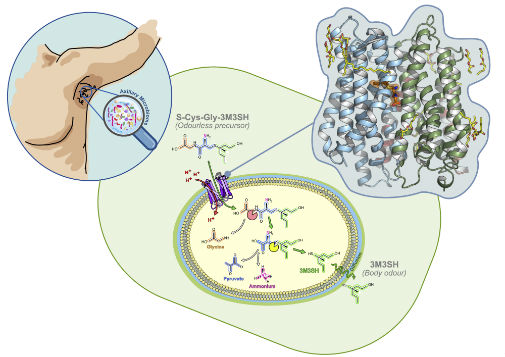 Little was understood about how bacteria are able to take up odourless compounds, secreted in underarms. Pic credit: University of York and Oxford

Co-author of the research, Dr Gavin Thomas from the Department of Biology at the University of York, said: “The skin of our underarms provides a unique niche for bacteria. Through the secretions of various glands that open onto the skin or into hair follicles, this environment is nutrient-rich and hosts its own microbial community, the armpit microbiome, of many species of different microbes.

“Modern deodorants work by inhibiting or killing many of the bacteria present our underarms in order to prevent BO. This study, along with our previous research revealing that only a small number of the bacteria in our armpits are actually responsible for bad smells, could result in the development of more targeted products that aim to inhibit the transport protein and block the production of BO.”

The researchers were able to see the transport protein’s detailed molecular structure by crystallising it in laboratories at the University of Oxford and analysing the data at the nearby Diamond Synchrotron Facility; providing a blueprint for how it works and ways to target it.

The process provided insight that may also have important implications for medical science.

Co-author and world-leading membrane protein structural biologist, Professor Simon Newstead, at the Department of Biochemistry, University of Oxford, said: “The protein is a member of a family of peptide transporters present in many bacteria. The new insights into its structure may also provide clues as to how this family of transporters bind other diverse peptides - important information as a similar membrane transporter is used in humans for intestinal absorption of drugs in our small intestines.”

Structural basis of malodour precursor transport in the human axilla is published in the journal eLife, and co-authored by Dr Gavin Thomas and Dr Michelle Rudden, University of York, Department of Biology, in collaboration with the University of Oxford.

The study was funded by the Biotechnology and Biological Sciences Research Council (BBSRC) through an iCASE studentship to Daniel Bawdon (Department of Biology, University of York) with Unilever, Proof of Concept funding from the BBSRC Network in Industrial Biotechnology, CBMNet, and a BBSRC LINK award to Professor Thomas with Unilever. Research in the Newstead group is supported by the Wellcome Trust.