Marine conservation biologist at the University of York comments on the Emperor Penguin's fight for survival, as depicted in episode two of BBC's Dynasties. 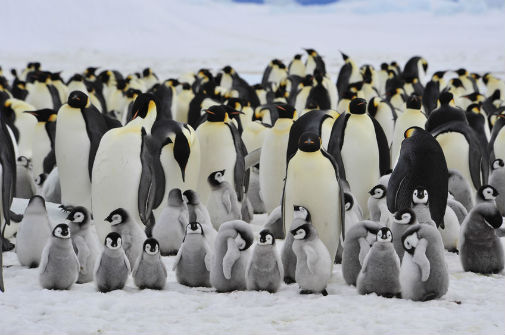 Professor Callum Roberts, from the University of York's Department of Environment and Geography, said: "Antarctica’s Emperor Penguin, featured on BBC’s Dynasties series, is a strong contender for the most extreme lifestyle of any creature on Earth.

"It is also a miracle of evolution, begging questions throughout the programme as to how their extraordinary behaviour, exquisite timing and incredible coordination, could possibly have arisen.

"The programme began with the onset of winter when the penguins leave the sea and march, one after another, for miles across the newly formed pack ice to reach their breeding ground. There the penguins mate after a long bonding ritual in which they imitate one another’s movements in what seems to us like dance.

"Fattened on a summer of fish, penguin mating looks more like a lard-barging contest. The parents stay together as the Antarctic sun weakens, until she lays an egg that is passed to the male for care through the long night of winter. The females trek back to the ocean, by now far away at the edge of the ice pack, to feed.

"The film crew overwintered with the penguins, watching in amazement as they survived brutal storms by an act of exceptional cooperation. The penguins fathers hold tight to one another in a group that seems still but when the film is speeded up is seen to be in constant motion as birds on the upwind side shift downwind when they can endure the blast no longer.

"And then the chicks hatch, near bald and highly vulnerable with only a few days of food from their fathers before they must be fed or die. With near miraculous timing, the females arrive back from the sea with life giving food and relieve the males of their care, letting them go to sea to feed.

"For the rest of the chick’s growth, the parents shuttle back and forth on their miles’ long pilgrimage across the sea ice. Incredibly, given the multiple jeopardy they face in this hostile place, two-thirds of the chicks make it to adulthood.

"Why they must undertake such arduous journeys was left a little unclear by the programme-makers. The birds breed on sea ice, which remains frozen for longest up against the edge of the continent.

"So they must march, sometimes tens of miles, from the seaward edge of the ice to reach safe breeding grounds. The ice must remain frozen long enough for the chicks to grow and develop their waterproof plumage. If it melts too soon, the chicks die.

"Inevitably, global warming is casting a shadow over their future. Any shortening of the ice season will be bad for the Emperor. But there is good news too.

"Satellite exploration of the white continent has revealed more Emperor colonies than had been discovered on foot, increasing the estimated population size by 28% to 238,000 breeding pairs. The toughest of all birds is an intrepid survivor."