Establishing a quantum internet to transfer huge amounts of quantum information within a split second across the world is the ‘Holy Grail’ of the future quantum technologies for the computer engineering and communications industries. 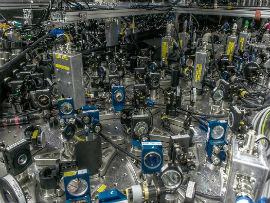 But there are substantial hurdles to overcome before such a fundamental development can occur, according scientists at the University of York.

In an article in Nature, Dr Stefano Pirandola and Professor Samuel Braunstein, of the University’s Department of Computer Science, argue that a hybrid system offers the best chance of achieving this goal.  Cross-disciplinary research by scientists, engineers and manufacturers as well as substantial investment is necessary to make progress.

They say that only hybrid approaches combining the physical systems which achieve the distinct elements of the quantum internet – process, communication and storage – are likely to be successful.

A global distributed quantum computer or quantum internet will need to integrate different sorts of quantum technologies. Developers will have to link light-based teleportation, for long-distance quantum communication, to matter-based quantum memories and quantum computers for data storage and processing.

In 1993 physicists discovered a way of ‘teleporting’ a quantum system from one place to another without moving it but with certain physical limits -- nothing can be transmitted faster than the speed of light and the uncertainty principle restricts what is known about a quantum system’s state at a given time. But thanks to entanglement, the most unusual feature of quantum mechanics, the replica can perfectly mimic the original. Quantum systems can become intimately correlated with each other so that an action on one has an instantaneous `effect' on the other. Today, quantum teleportation is still considered to be the most robust and reliable protocol for long-distance quantum communication via optical photons.

Dr Pirandola and Professor Braunstein say that the most advanced processing technology for quantum computers is provided by superconducting qubits which interact by releasing and absorbing microwave photons. The challenge is to ensure that storage and retrieval of quantum information is fully reversible.

They also say that developers must interface microwave photons with optical signals to communicate quantum information across long-distances. Transducers which convert optical photons into microwave ones and vice versa would facilitate this but the current technology cannot yet guarantee conversion efficiencies greater than 10 per cent.

Dr Pirandola said: “We need a more efficient interface between superconducting circuits and solid-state quantum memories, increasing the performance of storage and retrieval of microwave photons. Then we should design and integrate microwave-optical converters which efficiently connect on a chip microwave with optical photons for long distance quantum communication.

“These steps necessitate a closer interaction between research teams. Industry too needs to be involved, especially those multi-national corporations which are leaders in computer hardware and telecommunications. The development of a quantum internet needs investment on a substantial scale.”

The University of York leads a unique collaboration to exploit fundamental laws of quantum physics for the development of secure communication technologies and services for consumer, commercial and government markets.

The Quantum Communications Hub is one of four in the Engineering and Physical Sciences Research Council’s new £155m National Network of Quantum Technology Hubs.