An international team of scientists investigating the electronic properties of ultra-thin films of new materials – topological insulators (TIs) - has demonstrated a new method to tune their unique properties using strain. 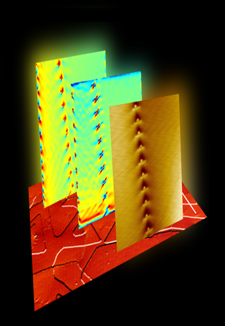 Topological insulators are new materials with surfaces that host a new quantum state of matter and are insensitive to contaminants, defects and impurities. Surface electrons in TIs behave like massless Dirac particles in a similar way to electrons in graphene. Moreover, surface currents in topological insulators also preserve their spin orientation and coherence on a macro scale.

The ability to control the surface electronic states of TIs is a crucial step in the realisation of their potential in highly energy efficient spintronic devices.

Dr Vlado Lazarov, from York’s Department of Physics, said: “These inherent properties of TIs, and the interplay between magnetism and proximity to superconductors, make topological insulators a prime platform for the realisation of solid state quantum computing devices.

“The ability to control the surface electronic state of the TIs is a crucial step in realising their potential in energy efficient devices. Through our research, we have shown that it is possible to tune the properties using strain.”

Using Scanning Tunneling Microscopy at UW-Milwaukee and aberration corrected Transmission Electron Microscopy at the York-JEOL Nanocentre, the researchers demonstrated that tensile strain can lift the topological order, while compressive strain can shift in energy the characteristic Dirac point.

Professor Lian Li, from UW-Milwaukee, said: “Using these advanced microscopes, we examined the low-angle tilt grain boundaries in Bi2Se3(0001) films and found that they consist of arrays of alternating edge dislocation pairs. Along the boundary, these dislocations introduce different types of strain – compressive and tensile.

“Through further tunnelling spectroscopy measurements and quantum mechanical calculations, we discovered that Dirac states are enhanced under tensile strain and destroyed under compressive strain. These findings suggest new ways to control TIs’ electronic properties, for example, by applying stress.”

The York physicists carried out atomistic studies at the York-JEOL Nanocentre at the University of York, a world-class research and teaching facility. The research was supported by the National Science Foundation, USA (DMR-1105839) and a Royal Society international exchange grant.