Study reveals the role of sex in spread of deadly disease

Research involving scientists at the University of York has provided important new information about transmission of human leishmaniasis, a group of infectious diseases which kills more than 100,000 people a year. 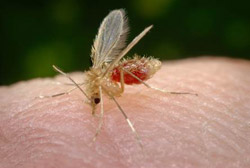 Professor Deborah Smith of the Centre for Immunology and Infection at York, working with colleagues at the Wellcome Trust Sanger Institute and Charles University in Prague, has shown that Leishmania parasites reproduce sexually in the wild.

The research, published in PLOS Genetics, is a significant step forward in understanding how leishmaniasis is spread in endemic regions.  Caused by Leishmania parasites, human leishmaniasis is a serious public health problem in more than 90 countries worldwide. There are high fatality rates among children and young people and those with suppressed immune systems.  Pharmaceutical treatments are limited and there is no vaccine.

These microscopic organisms infect humans through the bite of a female blood-feeding sand fly carrying infective parasites in its gut.  People only become infected, therefore, in geographical regions that are well-suited to support sand fly populations -- those with suitable habitats, humidity and temperature.  But the biology of the parasite in the sand fly is also critically important in determining the outcome of infection in man.

The new research uses DNA sequencing to investigate genetic variation at the highest level of resolution in Leishmania parasites isolated from sand flies caught in a defined focus of human leishmaniasis in south-east Turkey.  This analysis provides evidence that Leishmania parasites can reproduce sexually in wild-caught sand flies, an event only detected previously under specialised laboratory conditions..  It also establishes, for the first time, quantitative estimates of the relative rates of sexual and asexual reproduction during the parasite life cycle.

Professor Smith said: “This information is critical to our understanding of how Leishmania has become genetically-adapted for successful transmission by sand flies to man and the resulting spread of human disease.”

The Centre for Immunology and Infection is a joint research centre created by the Hull York Medical School and the University of York’s Department of Biology.