An international team of scientists led by physicists from the University of York has paved the way for a new class of magnetic materials and devices with improved performance and power efficiency. 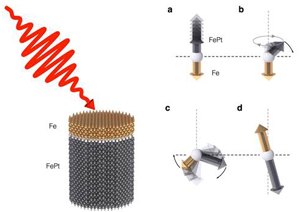 Magnetic materials are currently used to store almost all digital information. However, with information processing and storage now making up a significant fraction of the world’s energy consumption, continuing improvements in energy efficiency will require new technologies and materials.

A promising development is all-optical thermally induced magnetic switching (TIMS), which uses ultrafast laser pulses to change the magnetic state of the material, equivalent to writing a single bit of data. In all-optical switching there is no need to use magnetic fields to write the data and so a significant reduction in power consumption can be made. Moreover, the deposited laser energy per written bit is much smaller.

Until now, only rare-earth-transition-metal alloys called ferrimagnets have been shown to exhibit all-optical switching. However, these materials are both difficult to produce at the nanoscale necessary for technological devices and expensive due to their use of rare-earth metals such as Gadolinium (Gd) and Terbium (Tb).

The research, published in Applied Physics Letters, demonstrates the use of a synthetic ferrimagnet - a sandwich of two ferromagnetic materials and a non-magnetic spacer layer. The spacer layer engineers the coupling between the two ferromagnets so that they align opposite to one another. When subjected to an ultrafast laser pulse this structure spontaneously switches its magnetic state representing writing a single bit of data.

Corresponding author Dr Richard Evans, from York’s Department of Physics, said: “Energy efficiency is one of the most important goals for technological devices due to their expanding use with an increasing world population and resultant demand for energy.

“The synthetic ferrimagnet structure overcomes the intrinsic problems of rare-earth-transition-metal alloys and paves the way for a new class of magnetic materials and devices with improved performance and power efficiency. The results are a significant step towards realising a device based on thermally induced switching as it shows that structures on the nanometre length scale can be used.”

Co-author Professor Theo Rasing, Head of the Department Spectroscopy of Solids and Interfaces at Radboud University Nijmegen, said: “Since our original discovery of all-optical-switching of magnetic domains in these ferrimagnetic alloys more than five years ago, the fruitful collaboration between our experimental efforts, the possibilities provided by the unique instrumentation of the Helmholtz-Zentrum  and the theoretical insight provided by the York team, has led to this truly European success.”

The research received financial support from the EU Seventh Framework

Programme, as well as the Netherlands Organization for Scientific Research (NWO) and the Foundation for Fundamental Research on Matter (FOM).