Scientists collaborating on ash dieback research can reveal the first genetic clues that could help them identify and breed trees tolerant to the disease. 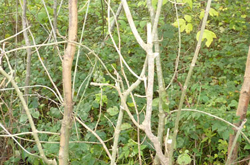 Scientists from the University of York analysed data generated by the John Innes Centre and The Genome Analysis Centre in Norwich from around 180 Danish trees. The susceptibility of these trees to ash dieback has been measured by scientists at the University of Copenhagen.

Professor Ian Bancroft of the Centre for Novel Agricultural Products (CNAP) in the Department of Biology at York said:  “Some Danish trees are known to withstand the disease and we have the first data showing that activity in some genes seems to be particularly important for this.”

One of the most resistant Danish trees is a strain called “Tree 35”. Using data generated by The Genome Analysis Centre, Dr Martin Trick at the John Innes Centre made a catalogue of all the genes expressed in this strain during the first flush of growth in young leaves. He then used this as a reference from which to catalogue genetic variation amongst 180 Danish trees that have been scored for disease resistance.

He also catalogued variation in how highly the genes were expressed. This turned out to be important data according to York’s analysis, as the activity of some genes seems to be correlated to susceptibility or resistance.

The research is featured on the BBC Radio Four programme Costing the Earth http://www.bbc.co.uk/programmes/b03xf0gc

“From a global search of all the many thousands of genes, we can now start to concentrate our research effort on around a dozen that seem to be particularly important,” said Dr Trick.

“The speed at which our focus is narrowing is down to the collaborative nature of the research.”

The consortium of scientists is being led by the John Innes Centre, applying genetic approaches from plant science to respond to the threat of tree disease epidemics. The insights and tools created during the research will help with responses to future threats. All findings are available on the open source website oadb.tsl.ac.uk, from which scientists are crowdsourcing worldwide help with analysis.

“We are now at the stage of being able to say that if specific genes in a certain tree are expressing at particular levels, that tree is likely to be less susceptible to ash dieback,” said Professor Bancroft.

“We expect soon to be able to identify the genes that control the expression of these marker genes.”

The next steps will be to confirm that these markers are good predictors of disease susceptibility in the field and to start testing whether some UK trees, which are now in the path of the oncoming disease, show similar genetic patterns associated with low susceptibility.

The research collaboration is part of a £1.5 million project funded by BBSRC.