A new study by scientists at the University of York and the Royal Society for the Protection of Birds (RSPB) shows that bird species which have colonised the UK in recent decades breed initially almost exclusively in nature reserves and other areas specially protected for wildlife. 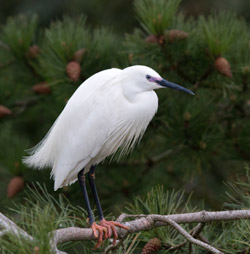 Published online in the journal Proceedings of the Royal Society B., the study shows that, of the 20 wetland bird species that bred for the first time in the UK since 1960, 18 bred first in these protected areas.  Protected areas were crucial as the population established and grew. Once established in reserves, the birds began to spread out into other locations as they expanded their ranges across the country.

For some warmth-loving southern species, such as Little Egrets and Cetti’s Warblers, these arrivals appear to be in response to a changing climate. For others, such as Common Cranes, they are a response to other factors, such as recovery from historical loss of habitat or persecution.

The mainstay of traditional conservation has been to establish protected areas to provide refuges against the loss of habitats and other threats in the surrounding countryside. Ironically, this study comes at a time when the value of protected areas is being questioned in some quarters because climate change and other factors cause animals to move away from their traditional haunts and into new regions.

However, species which are shifting their ranges also need high quality places to move into. For birds, at least, it appears that the current network of protected areas in the UK is providing such places.

“This study shows that the hugely important role that nature reserves and protected areas play will continue undiminished in the future,” according to Jonathan Hiley.

Co-author Professor Chris Thomas, of the Department of Biology at York, added: “This gives some cause for optimism in the midst of concern that climate change and other factors will imperil many species. Protected areas are helping to give birds and other species a fighting chance of moving into new regions where they can breed successfully.”

Co-author Dr Richard Bradbury, of the RSPB, said: "Many species have only been able to colonise, or re-colonise, the UK as a result of a tremendous recent effort by conservationists to recreate and manage large wetland areas. This action has been absolutely vital in creating starter homes that enable these species to settle and flourish.

"But while it is great news that the hard work of conservationists is benefitting these new arrivals, we must not forget that the changes in our climate which brought many of them may prove catastrophic for wildlife in the long term if it continues unabated."

Co-author Mark Holling, Secretary of the Rare Breeding Birds Panel, added: “Data on the rarest breeding birds in the UK, collected over the last 40 years, supported the findings of the research. As birds colonise the UK, or move to new parts of the country, the majority of them move initially to areas protected for nature, underlining their importance for conservation of rare species.”