Visitors to the York Food & Drink Festival will have the chance to explore – and taste – York's rich history thanks to a special event staged by researchers from the University of York's Borthwick Institute for Archives. 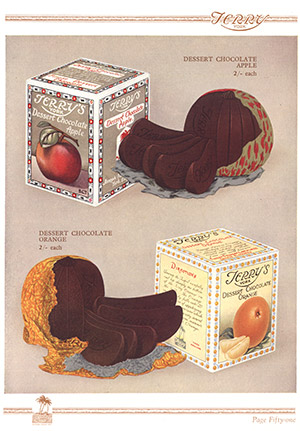 Chocolate Orange and Apple Product Brochure 1936 - with kind permission of Borthwick Institute The Chocolate Apple was produced at the company’s Bishopthorpe Road factory in York between 1926 and 1954, until it was discontinued in favour of the more popular Chocolate Orange.

Using this confectionary curio as a starting point, Re-imagining the Chocolate Apple will take visitors on a journey of discovery into York’s chocolate-making past.

The event is free to attend and has been organised by Borthwick Institute researchers Kerstin Doble and Francesca Taylor in collaboration with the York Cocoa House and the Mansion House.

Kerstin Doble said: “Re-imagining the Chocolate Apple will take the audience on a journey of discovery through the Borthwick Archives and the Mansion House itself, bringing together science and the social and chocolate-making history of York, with displays of vintage packaging and period dining.

“This event is the first in a larger programme curated by the Borthwick Institute for Archives under the banner of ‘Opening Up Archives’.”

The Borthwick Institute is one of the biggest repositories for archives outside London, and includes the archives of Rowntrees and Terry’s.

Francesca Taylor said: "We're really excited about resurrecting the Terry's Chocolate Apple and tasting this strange combination of flavours for the first time. It is also a great opportunity for us to bring our archive material out of the Borthwick so people can explore the incredible range of documents we look after.

"We hope this event will open up our archive to a wider audience and encourage York residents to visit and make use of this wonderful resource on their doorstep."

As part of the event, York Cocoa House's chocolate and confectionery expert Sophie Jewett will lead a workshop in the kitchen, where visitors will take inspiration from the exhibits to create their own flavoured chocolate bar, complete with its own wrapper.

“Unwrapping the Chocolate City: Re-imagining the Chocolate Apple” will take place at the Mansion House, St Helen’s Square, York, on Sunday, 29 September from 10.30am to 2.30pm. Admission to the exhibition is free, but there is a £3.50 fee for the chocolate making workshop. Workshop places can be booked at the York Cocoa House website.