A group of leading researchers from the University of York has joined forces to identify and catalogue all the social studies carried out in York over the past century. 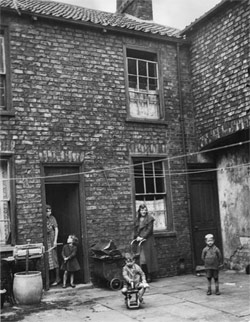 The aim is to produce a searchable archive which will act as a useful public resource and draw attention to the city's importance in the development of international social and urban research.

Dr Rowland Atkinson, from the University's Centre for Urban Research, said: "Since Seebohm Rowntree’s Poverty: a Study of Town Life published in 1901, York has been hugely influential for research on key social questions today.

"The city of York has been the object of many major social studies conducted both by the university and a number of key social reformers which have been essential to the development of the social sciences. The city has been a kind of testing ground in which methods and techniques of social research have been developed. These studies have helped us better understand the places in which we live."

The inter-departmental cataloguing project draws together researchers from the University’s Centre for Urban Research, the Social Policy Research Unit and the Centre for Housing Policy. The team will gather both university-based and other social science studies that have been carried out on the city between 1900 to date.

Dr Atkinson said: "The legacy of early pioneers like Rowntree, who used York as a kind of social laboratory, digging beneath the public image of the city to reveal a range of social problems, has been influential in the development of social policy interventions and the honing of methods and techniques of social and urban analysis.

"The city of York is relevant to studies of urban life in the British and European contexts, as an example of typical city life today. Our work will draw on York's prestigious history by cataloguing this influential work and will help emphasise the strong relevance of social sciences to the future life and planning of the city."

The team of researchers are making contact with key staff across the city's civic and educational library and archive resources to seek support in identifying this literature. Anyone who can help with identifying social studies which have used York, can contact Dr Rowland Atkinson on rowland.atkinson@york.ac.uk or phone 01904 324742.