Yoga can provide more effective treatment for chronic lower back pain than more conventional methods, according to the UK’s largest ever study into the benefits of yoga.

The study, led by the University of York and funded by Arthritis Research UK, found that people offered a specially-designed 12-week yoga programme experienced greater improvements in back function and more confidence in performing everyday tasks than those offered conventional forms of GP care.

The research focused on back function – people’s ability to undertake activities without being limited by back pain, which was measured using the Roland Morris Disability Questionnaire. Although improvements in back function were more pronounced at three months, researchers found there was still an improvement in people’s ability to perform tasks such as walking more quickly, getting dressed without help or standing up for longer periods of time even nine months after the classes had finished. 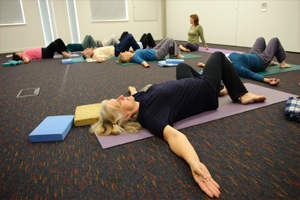 The trial involved two groups of people who were both receiving GP care for chronic or recurrent back pain. A 156-strong group were offered group yoga classes specially designed to improve back function, while a second control group of 157 people were offered GP care alone.

The findings of the study, which was carried out by researchers from the Department of Health Sciences at the University of York and the Hull York Medical School, are published in the Annals of Internal Medicine this week.

Lower back pain is a common episodic condition, with 80 per cent of the UK population suffering from it at some point in their lives. It is estimated that around 4.9 million working days a year are lost due to back pain. However, few effective, evidence-based treatments exist.

The yoga programme, which involved 20 experienced yoga teachers, was designed and delivered by Truro-based Alison Trewhela, an Iyengar Yoga teacher and Senior Practitioner in Yoga on the British Register of Complementary Practitioners, in collaboration with York-based yoga teacher Anna Semlyen, a Back Care Advisor to the British Wheel of Yoga.

The classes were designed for complete beginners, with yoga teachers given extra training in back care. Participants were recruited from 39 general practices in seven Primary Care Trust areas, with classes held in non-NHS premises in Cornwall, North London, West London, Manchester and York.

Chief Investigator Professor David Torgerson, Director of York Trials Unit, in the University’s Department of Health Sciences, said: “Back pain is an extremely common and costly condition. Exercise treatment, although widely used and recommended, has only a small effect on back pain. We therefore set out to investigate an alternative approach using a specially-developed weekly yoga programme for back pain sufferers to see if this allowed them to manage their back pain more successfully.

“While previous studies have focused on the short-term benefits of yoga, we also wanted to see the long-term effects and measured improvements three, six and 12 months after entry into the study. Our results showed that yoga can provide both short and long-term benefits to those suffering from chronic or recurrent back pain, without any serious side-effects.”

Medical Director of Arthritis Research UK Professor Alan Silman said: “We’re delighted that our trial has shown that yoga provides such positive benefits for people with chronic low back pain. This extremely common condition cannot be managed with painkillers alone and there is an urgent need to have non-drug therapies that sufferers can utilise in their own home. This trial is part of our larger commitment to seek self-help solutions to this common musculoskeletal problem. There are compelling explanations why yoga may be helpful and this trial lends powerful support to the wider use of this approach.”

Trial participants completed a questionnaire at three, six and 12 months from the start of the programme. On average, members of the yoga group were able to undertake 30 per cent more activities compared with those in the usual care group after three months, a statistically significant difference between the two groups which has been recognised as clinically important.

The trial showed that there was more reduction in pain in the yoga group than the usual care group, but of marginal statistical significance.

Trial participant Sue Faulkner, 68, retired from her job as an administrator four years ago with the intention of spending her time gardening. However, within six months of retiring her back was so bad she found that walking any distance was painful and she needed to stop regularly to rest. Gardening was out of the question.

Sue from Bishopthorpe in York said: “I felt a definite benefit after the programme as it made me more flexible and we were taught positions to relieve certain types of back pain. I’ve continued going to yoga classes and still do the positions I was taught during the 12-week programme. Walking around is no longer a problem and I can do my gardening now so long as I pace myself. I’ve even taken on an allotment with my daughter and son-in-law and no longer take pain killers.” 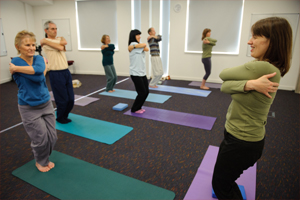 Those attending the specially-designed yoga programme, which involved step-by-step gentle classes, were encouraged to become self-sufficient in the long-term. Classes were supported with four home practice sheets, a manual, and a four-track audio CD teaching how to relax physically and mentally.

“As most back pain conditions recur, these lifelong self-management skills are likely to be useful as a preventative measure. As a result of smaller previous trials, one million Americans currently practise yoga as a recommended treatment for low back pain.”

Participants in the yoga programme were surveyed nine months after classes had finished and more than half of those who responded were still regularly practising yoga, mostly at home, twice a week.

More information on the 12-week ‘Yoga for Healthy Lower Backs’ programme and trial is available at www.yogatrial.co.uk. Lower back pain sufferers, yoga teachers and health professionals can also learn more about the programme at www.yogaforbacks.co.uk, a website created by the yoga teachers involved.