An international team of researchers led by the University of York is helping healthcare professionals in Sierra Leone to rebuild and improve the country’s mental health services in the wake of a devastating civil war.

It is estimated that around four out of five people experiencing mental distress in low and middle-income countries such as Sierra Leone do not receive any formal support.

To address this treatment gap, a team of researchers from the International Centre for Mental Health Social Research (ICMHSR) is investigating whether introducing community-based psychosocial approaches – treatments which do not require medication – could improve care and decrease the stigma of mental health.

Dr Martin Webber, Director of ICMHSR and an Anniversary Reader in Social Work at the University of York, says, “Social interventions have the potential to improve the quality of life, social participation and well-being of people experiencing mental distress. By understanding how a person is connected to the community and building on these links, social interventions can be used to promote recovery by helping people to become empowered and develop self-esteem.”

Following a fact-finding visit to the West African country in July, researchers are looking to develop a model of a practice and training programme for community-based nurses. This work considers how social interventions, developed in partnership with patients' families and friends, and other members of the community such as traditional healers, might increase the chance of recovery.

An estimated 13 per cent of the population of Sierra Leone suffer from a mental health condition, yet there is only one trained psychiatrist and one psychiatric hospital serving the country’s four million people

Meredith Newlin, from York's Department of Social Policy and Social Work, says, "An estimated 13 per cent of the population of Sierra Leone suffer from a mental health condition, yet there is only one trained psychiatrist and one psychiatric hospital serving the country's four million people.

"At the national level the infrastructure is simply not there. We believe the best way of improving care and closing the treatment gap is to empower people in local communities to offer effective support."

Dr Whitwell, from the King's Sierra Leone Partnership, adds, "From what we saw in Sierra Leone, community-based nurses are best-placed to build upon and improve a patient's support network and help them on the road to recovery. A new mental health training programme is being introduced for nurses and we are considering how to support this by offering a training package concentrating on psychosocial approaches. 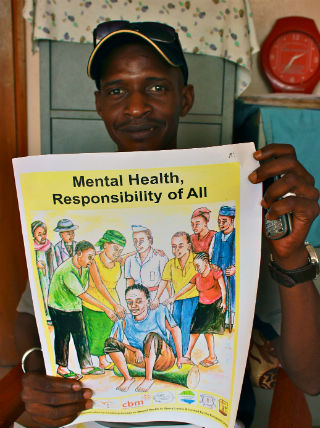 Community Association for Psychosocial Services (CAPS) mental health advocacy posters. Photo credit: Meredith Newlin "We believe nurses have a key role to play in local communities, breaking down the stigma of mental health and changing traditional beliefs, which even today, can sometimes lead to people being beaten or chained."

The long-term aim of this project is to adapt evidence-based models of practice and training materials to meet the needs of other countries facing a similar treatment gap.

Researchers from the University of Makeni are being trained to evaluate the success of the nurse training. The long-term aim of the project is to adapt the training programme and materials to meet the needs of other countries facing a similar treatment gap.

The Centre for Chronic Diseases and Disorders (C2D2), based at the University of York, funded the first phase of the Sierra Leone project, which involved a feasibility study. C2D2 is supported by a Wellcome Trust 'Institutional Strategic Support Fund' award, and the University of York. The next stage of the project, including the development of a model of practice and the nurse training programme, is funded by the Maudsley Charity.