A burial fit for a King

Should York Minster be the final resting place for Richard III whose remains have been discovered under a car park in Leicester? Professor Mark Ormrod, of the Department of History, considers the issues.

As lord of the North of England, Richard III had a ‘special relationship’ with the city of York, and York Minster, before becoming King.

There are long-standing myths that Richard III was crowned at York, and that he expressed a desire to be buried there. In fact, like all monarchs since 1066, Richard was crowned in Westminster Abbey. But soon after, he made a ceremonial visit to York, to revive an older Norman practice of ‘crown-wearings’ - sitting in state and holding a ceremony of inauguration in the Minster.

The burial myth is less easy to disentangle. It relies on references to Richard’s decision to found a great college of over 100 priests who would say masses in the Minster for the king and his family. We have no foundation charter and Richard III’s college came to nothing as a result of his deposition in 1485.

Since the documentation is insecure, some historians have jumped to the conclusion that the college was also intended to be a royal chantry and that the King wished to buried in the Minster. There is, however, no direct evidence that Richard III had any definite plan for his own burial, at York or otherwise. 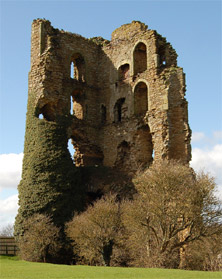 ‌It would certainly have been unusual in 1485 for a king of England to be buried in York. The only medieval royal tomb in the Minster’s collection is that of William, son of Edward III, who died just weeks after his birth at Hatfield in Yorkshire.

Richard III’s own political identity as an adopted northerner, and the idea of Yorkshire as his natural powerbase, may well have encouraged him to sentimentalise his special relationship with York. It may also have led him to consider how the Minster, one of the greatest European buildings of the age, could act as a fitting royal mausoleum.

One of the key missing pieces of information about Richard is his choice of burial place for his only child, Edward of Middleham, who died at the age of ten in 1484. The memorial to the young prince in the parish church at Sheriff Hutton, near York, whose castle was one of Richard’s great strongholds, provides perhaps the most intriguing suggestion that Richard III retained a sense of dynastic commitment to York and its region.

Royal Mausolea before the Reformation

Westminster Abbey became the assumed place of Royal burial from Henry III in 1272 to Henry V in 1422, though there were exceptions. Richard III’s older brother, Edward IV, established the tradition of burial at Windsor, by rebuilding St George’s Chapel and thus creating a fitting space for royal funerals and memorials.

English kings are sometimes known to have made fanciful declarations of intent about place of burial though there is only positive evidence if the monarch left a will or had made definitive provision for burial in his own lifetime.

Deposed kings and those killed in battle were usually buried in an abbey or friary close to the place of death, or in another church under special royal protection. After his death at the battle of Bosworth, Richard III was buried at the Franciscan friary in Leicester. That city had no cathedral in the Middle Ages and the medieval parish church of St Martin only became a cathedral in 1927.

Refusing to honour the remains of the deceased monarch with interment in a higher-status church or more public place was often politically expedient. Henry VII may have been wary about turning his predecessor into a political martyr. We know that he paid for a tomb to be erected over Richard’s burial place at Leicester. The early Tudor regime remained sufficiently hostile to Richard’s memory that, when Henry VIII carried out the suppression of the monasteries, no attempt was made to recover Richard’s remains and remove them to a place of honour and safety.

‌The debate about where we should rebury Richard III is influenced by modern church law and archaeological practice, both of which prefer disturbed human remains to be reinterred as close as possible to the place they were found, and ideally within the same ecclesiastical parish. The Ministry of Justice is likely to adopt this course, though if the Queen decides to intervene at this late stage, the place of burial will be decreed by her.

Matters would have been very different in the past, when kings thought themselves to be above some of the legal restrictions placed on ordinary people. More assertive monarchs sought to make whatever advantage that they could from the remains of their deceased and deposed predecessors. The personal preferences of the deceased were sometimes taken into account.

Richard III may have thought that York Minster would make a fitting place for his burial. His family, the House of York, might have preferred their existing mausolea, at Fotheringhay in Northamptonshire or at St George’s Chapel, Windsor. Had history worked differently, Richard III might equally have ended up being transferred to a state tomb in Westminster Abbey. It remains to be seen whether the final decision over the king’s resting-place will actually rest on such historical precedents or on a set of modern principles that would have seemed fundamentally inappropriate and irrelevant in Richard’s own time.