A photographic exhibition challenging stereotypes of ‘Brits Abroad’ will be staged at the University of York as part of an event looking at emigration.

Photographer Charlie Clift travelled to Spain to photograph British expatriates living near the Mediterranean coast and hopes his images will make people think differently about immigrants. 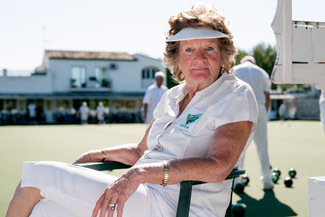 Carole regularly plays bowls at the Javea Green Bowls Club which consists almost entirely of British members. She loves living in Spain and doesn’t want to move but is frustrated that she can no longer vote in British parliamentary elections.

From bowls clubs and bars, to beaches and schoolyards, each person photographed is shown in a location that defines their new life in Spain, giving the viewer an insight into their way of living.

The British people pictured range from those who cannot speak Spanish and have hardly integrated with the locals, to others who have married Spaniards and educated their children in Spanish schools.

The Brits Abroad photography exhibition and lunchtime lecture on Thursday, 28 November is open to all and free to attend. The event is part of the Migration and Economic Crisis: Responses of Brits at Home and Abroad project, a White Rose University Consortium funded research collaboration, involving the Universities of York, Leeds and Sheffield.

The project aims to bring together multi-disciplinary migration researchers from the three Universities and to strengthen and establish new links with academic and non-academic partners in the UK, the EU and internationally, through a series of seminars which began in September.

Dr Neil Lunt, from the University of York’s Department of Social Policy and Social Work, is one of the project leaders. 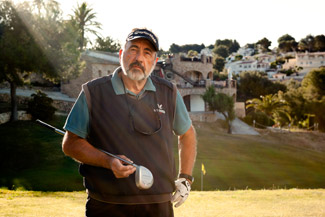 David is a musician who retired to Spain with his wife. He enjoys living in a typical Spanish village and plays golf regularly with friends, many of whom are also expatriates.

Dr Lunt said: “The Migration and Economic Crisis project aims to address an important gap in current migration research – the migration-related responses of the British at home and abroad to the current economic crisis.

“The numbers are significant. Over 5m British people live outside the UK, with almost 3,000 Britains moving abroad every week.  Around 700,000 British expatriates live in Spain.”

Dr Majella Kilkey, of the University of Sheffield’s Department of Sociological Studies, is also one of the project leaders. She said: “Despite these numbers, British emigration has typically been invisible in policy debates. There is, however, increasing attention focused on what (if anything) can be done to stem a ‘brain drain’, how to reconnect with the overseas British emigrant population; and ensuring a smoother return for those who re-emigrate back to the UK.”

The photography exhibition will be held as part of a Migration and Economic Crisis seminar focusing on graduate and professional mobility. The seminar will bring together around 30 academics to discuss issues around the migration of graduates from the UK and Ireland to countries such as Canada and Australia, as well as looking at Euro-commuters. 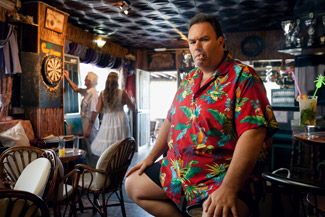 Simon owns a Caribbean themed bar on Fuengirola beachfront and enjoys the relaxed lifestyle of the area. He moved to Spain for medical reasons because the warm climate helps alleviate his arthritis.

Portrait photographer Charlie Clift said: “Immigrants are often spoken about in terms of statistics or stereotypes, but I wanted to show how different each person can be.

“Although many expatriates I met had traits of that commonly known figure of a British person living in Spain, they often surprised me with other parts of their personality or lifestyle. Almost no-one I met in Spain fitted the stereotype we know in the UK. By focusing on British people who are immigrants in other countries, I hope to help a British audience to think twice about immigrants in general.”